Our best cryptocurrencies to invest in had a monster August, with an average gain of 71% for the month.

In late July, Money Morning named the 12 best cryptocurrencies for investors interested in diversifying into this new and rising sector. With more than 1,000 cryptocurrencies to choose from, investors need help sorting out the bona fide prospects from the scams and the also-rans. 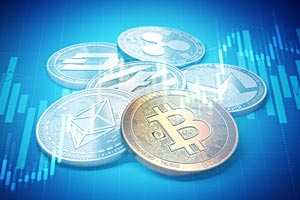 So far the Money Morning dozen are proving to be winners. Only one of the 12, Gnosis, fell in August. And that was only by 7.5%.

The best cryptocurrency was Monero, which notched a stunning 250% gain.

Here's exactly how each of the cryptocurrencies we recommended fared in the month of August. Since the recent pullback happened after Sept. 1, it's not included in these results (but will be part of next month's update).

The cryptocurrencies are listed in reverse order, with the best performers last…

A Great Start for Our Best Cryptocurrencies to Invest In

Highlights: The SiaCoin price slumped mid-month but rose steadily from Aug. 22 on. SiaCoin might have ended the month with bigger gains but for the hype around the Aug. 10 FileCoin ICO. (FileCoin is a cryptocurrency that helps manage cloud storage, much like SiaCoin.)

Highlights: The Golem price spiked 23% on Aug. 24 following the new release of a new version of the Brass Golem software. It represents a major step toward the goal of Golem splitting off from its simulated "testnet" to the actual Ethereum network.

Highlights: The Stratis price jumped 22% on Aug. 10 when the Stratis team announced a major upgrade to their Breeze Wallet, technology that enhances the anonymity of cryptocurrencies like Bitcoin.

Highlights: The Ripple price soared 50% on Aug. 22 following rumors the Ripple company was in talks to form a partnership with a major bank or corporation. A week later officials from the People's Bank of China met with Ripple executives at the company's San Francisco headquarters.

Highlights: On Aug. 7, WikiLeaks announced it would accept donations in ZCash, citing its high level of user anonymity. On Aug. 17, the ZCash Foundation offered $80,000 worth of grants to attract innovative ZCash-based proposals from developers.

Highlights: On Aug. 1, a hard fork created a duplicate version of Bitcoin called Bitcoin Cash. The Bitcoin price shrugged off the disruption and had one of its best months of the year.

Highlights: The Litecoin price took off near the end of the month, driven by surging interest from South Korean investors. Litecoin rose 36% in the last week of August alone.

Highlights: An Aug. 16 article on Nasdaq.com cited Factom as "the first practical blockchain solution for the mortgage industry that allows users to store and create immutable mortgage records." Over the next 10 days, the Factom price rose 75%.

Highlights: The Ethereum price spent much of August trying to get back to the $400 level and nearly got there. As with Litecoin, growing demand from South Korea was behind Ethereum's relentless drive higher.

Highlights: On Aug. 17, Dash announced a partnership with Arizona State University's engineering school to create a Blockchain Research Lab. That and buying from South Korea was enough to more than double the Dash price last month.

Highlights: The news that set the Monero price on fire was the Aug. 21 announcement by South Korean exchange Bithumb that it would add Monero trading as of Aug. 27. That was good for an 80% gain just on the day of the announcement. It just kept riding higher after that.

Time-Sensitive Briefing: Thanks to just announced, historic legislation, a new pot stock boom is about to blow the doors off anything we've seen up to this point. In a time-sensitive audio briefing, pot stock expert Michael Robinson details five marijuana stocks that are best positioned to skyrocket upon legalization and how you can grab your stake in them. Click here to listen to the briefing…

I am very interested in Bitcoin etc. I am a subscriber to a number of your publications

During this 'cherry-picking' time hundreds of other cryptos would have done this well or better. SO, from 1 Sep to today what have they done – crashed! Your hype is pathetic and should be illegal in the manner in which you imply your methods are responsible for actually achieving these gains. Would like to see real buy/sell records rather than use past history using specific periods of time of absolute perfect timing – intentionally misleading are NOT realistic ONLY if you are as lucky as you imply. Probably won't post this one.

Thanks for reading Money Morning. Ths was not an attempt to "cherry pick." I published my recommendations on July 28. Any readers who bought these cryptocurrencies between then and Aug. 1 enjoyed big gains in the month of August. Since then, threats from China to shut down crypto exchanges has triggered a pullback. I believe prices will rebound before the end of Sept., however.

In any case, the idea of the article was to recommend the cryptocurrencies with the most potential over the next couple of years. August was admittedly had unusually outsized gains, but that's often how investing works. Those who hold these cryptocurrencies over the long term will see prices move higher.

How do I buy any of the cryptocurrencies you mention?

I believe you will find most of the answers you're seeking here. Thanks for reading Money Morning!