Not only did the gold price manage to stay above the $1,300 resistance level last week, but the metal surely and steadily climbed even higher. From Friday, Sept. 1, to Friday, Sept. 8, the price of gold gained 1.6% to $1,351.

Gold was clearly buoyed by the U.S. dollar's plunge to a nearly three-year low. The U.S. Dollar Index (DXY) – which measures the greenback against other currencies like the yen and the euro – dropped from 92.81 to 91.33 last week. That was the lowest since December 2014.

But North Korea's testing of a hydrogen bomb – considered the country's most powerful to date – on Sunday, Sept. 3, sent gold prices higher. On Tuesday, Sept. 5, the price of gold jumped 1.1% to $1,345.

Some indicators are starting to place the metal in overbought territory. While this could lead to a brief dip, I remain bullish on gold in the medium and longer terms. Today, I'm going to share with you my bullish gold price target for the end of 2017. 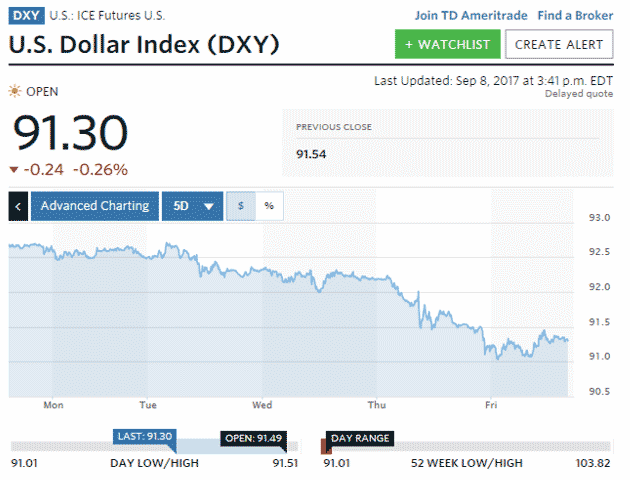 After settling at $1,330 on Friday, Sept. 1, the metal opened higher following Labor Day and North Korea's hydrogen bomb test. The news urged investors to sell their stocks and move into safe-haven gold on Tuesday, dragging the Dow Jones 1% on the day and boosting the gold price 1.1% to $1,345.

On Wednesday, Sept. 6, the price of gold opened lower at $1,339. It moved sideways at that level throughout the day as the DXY was also mostly flat. Gold prices closed the session at the opening level of $1,339 – 0.4% down from Tuesday's close.

But gold prices rebounded on Thursday, as the dollar sold off from 92.29 to 91.66. Gold climbed steadily throughout the session to eventually settle at $1,350 for a 0.8% gain.

After opening lower, the dollar stayed below the previous close the entire day and eventually settled at 91.33 – the lowest since December 2014.

While we can never tell what North Korea will do next, one factor that will continue to be fundamentally important for gold is the dollar. With the greenback down near a three-year low, the dollar's movement from now until the end of the year will play a large role in my gold price forecast for the rest of 2017.

These Are My 2017 Gold Price Targets