UN sanctions on North Korea won't work until the organization stops trying to appease China at the same time.

Unfortunately, the international committee will once again do just that when it meets today (Sept. 11) to discuss Pyongyang's ongoing nuclear ambitions.

The Red Dragon will almost certainly leave the emergency powwow this afternoon pleased. It knows full well how much Washington needs its support to curb North Korea's aggression, so Uncle Sam will have to cave to any revisions Beijing wants, even if that means relieving the pressure necessary to stop Pyongyang in its tracks. 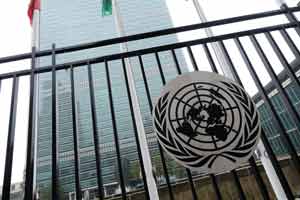 "It doesn't want hundreds of thousands of refugees streaming across its borders," Bill said. Furthermore, he explained, Beijing doesn't want to have to coexist immediately alongside a democratic South Korea should the Hermit Dynasty collapse.

And over time, the Red Dragon has managed to avoid this outcome by stalling efforts to punish North Korea.

In fact, a distinct pattern has emerged that illustrates China's control over UN sanctions on North Korea:

If the White House continues with this pattern, it can only expect to see an aggressive Pyongyang now and for the foreseeable future. The definition of insanity is, after all, doing the same thing over and over again and expecting different results.

But Washington seems to be clinging to the one instance in which kowtowing to China actually worked with North Korea.

At least for a brief blip of time.

When Pandering to China Worked - Sort Of

Macau was, back then, North Korea's ticket to the outside world. It allowed financial transactions to take place with the regime on its soil via the international banks it hosted.

There were three international banks in particular through which North Korea had been sending and receiving large clandestine sums of cash:

President Bush targeted the first bank only, even though North Korea had alleged accounts with the two Chinese institutions listed as well, reported The SCMP.

So of course China supported the batch of sanctions against Delta Asia 12 years ago; it was being let off the money-laundering hook.

That time, the financial pressure did bring Kim Jong Il to the table - at which he stayed for about five minutes before shirking the terms the West had to offer in order to carry out this century's first-ever nuclear test just one year later, in 2006.

Now the possibility of bringing North Korea to the negotiating table with China-friendly monetary sanctions is smaller still, because North Korea is under the rule of Il's third son, Kim Jong Un - a markedly more hostile leader than his father/predecessor.

Un has no qualms about drawing the ire of China, Russia, and, of course, the United States, because he knows China won't truly let anything hurt his regime. Again, Beijing doesn't want refugees or democratic ideology crossing its borders.

And yet, what we'll see come out of the UN sanctions conference today will be just another softball lobbed gently by Washington at Pyongyang, as Beijing watches imperiously from the stands...

Today's UN Sanctions on North Korea Will Be Nothing New

Already, the aforementioned pattern has begun to play out...

The Big Threat: The United States threatened harsher sanctions against North Korea on Aug. 4, promising a total oil embargo on the regime.

That embargo, of course, would have to be approved by China.

After all, North Korea is expected to import about 850,000 tons of crude oil this year, almost entirely from China, The New York Times reported on Sept. 5.

Pyongyang's military uses about a third of the country's imported oil. So an all-out stoppage of such access could handily cripple North Korea's military power.

North Korea's Reaction to the Threat: Un warned on Aug. 17 that his country will never put its nuclear weapons program on the negotiating table as long as President Trump's administration keeps up its "hostile policy and nuclear threat," The Denver Post reported that day.

China Negates the United States: China reminded America to push for consultations in lieu of strict sanctions on North Korea on Sept. 6. That same day, The South China Morning Post - a mouthpiece media site for the Chinese government - reported that it was "unlikely that Beijing would support a full oil embargo but a partial cut in supplies could be one option to keep its neighbor in check without bringing down the Kim Jong Un regime."

The United States Retreats: Just this past weekend, the UN revised its sanctions bill to make China happy. Instead of calling for a complete oil embargo on North Korea, the revised draft proposes a cap of crude oil exports at current levels. The problem here is that China does not publicly disclose details about its oil exports to North Korea, so we don't know the actual sum of that "cap at current levels." The U.S. Energy Information Administration, however, estimates that North Korea imports about 10,000 barrels per day, The Washington Post reported this morning.

These terms certainly aren't enough to stop the North Korean regime - which is exactly what China wants.

And the pattern continues. Bill Patalon knows exactly what the UN needs to do to break this pattern.

How the UN Should Respond to China

Bill explained this morning the actions the UN could have (and should have) taken to prevent this increasingly dangerous international crisis from getting worse...

Option No. 1: Get Tough, China Be Damned: "To work, sanctions have to have teeth," Bill said, "and they have to hit where it hurts. These watered-down sanctions don't achieve the goal, so what's the point? The 'Get Tough' scenario would have turned off the oil spigot - and caused pain, which is what the goal is."

The problem, of course, is that "teeth" is exactly what China doesn't want. Passing a resolution to sanction North Korea more heavily is one thing. Forcing North Korea's biggest trading partner to abide by that resolution is another entirely.

Option No. 2: The Quid-Pro-Quo Scenario: "All along, we've explained how - from a geopolitical standpoint - instead of just giving in to Beijing, this scenario would have had the UN say 'OK, we'll avoid the oil sanctions, for now, but in return, you agree to the asset freezes and the ship boarding.'"

Bill pointed to the naval quarantine used during the Cuban Missile Crisis that then-U.S. President Kennedy instated to prevent offensive weapons from making their way to the island nation's shores.

Given the necessity of China's cooperation and its reluctance to play ball, this seems the most feasible option. But instead, of course, Washington and the UN have taken option No. 3:

Now here's a look at your options in the midst of the North Korea nuclear crisis...

The United States has two antimissile defense systems - both of which have successfully passed test runs this year.

These systems are the THAAD and the GMD.

Bill first recommended the rocket engine venture as a "Buy" in 2013 - under its former name, GenCorp Inc.

And it's not too late to profit from this company. Currently, Aerojet is working to deliver 52 THAAD interceptors to the U.S. Army in the next year.

And as the North Korean threat escalates, those numbers are poised to climb.

For a chance to get in on Bill's perceptive defense profit plays yourself, click here.