The prohibition of marijuana is deadly.

In fact, the federal government's war on legal marijuana is killing more Americans than drunk driving is. 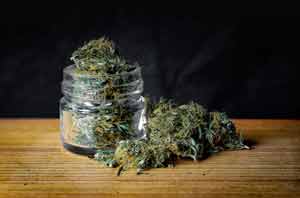 Yes, you read that right.

In fact, according to a new study published by the University of Indiana, the ban on marijuana causes as many premature deaths as drunk driving, murder, or even opioid overdose.

Put another way, legalizing marijuana nationwide could save thousands of American lives each year.

The study found that cannabis use is associated with decreased rates of obesity, diabetes mellitus, use of alcohol and prescription drugs, and opioid overdose deaths – just to name a few.

Moreover, the study concluded that "adverse effects of moderate cannabis use on physical health are subtle and rarely fatal."

Contrary to what once was popular opinion, the true culprit for thousands of premature deaths each year isn't cannabis but cannabis prohibition, according to the study.

That means, in states without marijuana laws, thousands of people will continue to suffer, needlessly, every year.

However, in 28 states plus the District of Columbia (and counting), cannabis-based medicines are beginning to make a difference…

"One American dies of a drug overdose every 11 minutes, and more than 2 million Americans are ensnared in addiction to prescription painkillers," said Jeff Sessions at a news conference on July 13. "We will continue to find, arrest, prosecute, convict, and incarcerate fraudsters and drug dealers wherever they are."

However, Sessions' efforts to bring the long arm of the law down on the illegal dealers and fraudulent prescribers won't completely solve the problem. No number of arrests will provide a safe way to relieve pain.

So now, the medical marijuana community is stepping up to the plate.

Michael's long been following the burgeoning medical marijuana industry, and he's come to the conclusion that we're at the beginning of a sea change in how we treat chronic pain, shifting from opioid-based medications to cannabis-based ones.

"Of course, we know that pain isn't going to magically go away, so something will have to take opioids' place," said Michael.

One of Michael's favorite marijuana biotechs – a true pioneer in this field – is poised to take advantage of Sessions' opioid crackdown. In fact, Michael recommended this company back in 2013, and Nova-X subscribers who invested in the company back then have enjoyed a 1,200% return on their investment.

i would like to know what marijuana stock to invest in

I think marijuana is ok, it can be used to make medicine, people are using it all over the place for medicine already, and its nothing new, marijuana was used for medicine in the past, but who's smoking it now?, and what are they doing for employment?, how many people that smoke marijuana are also on welfare and living in government housing?, or does it really matter, I wish marijuana was legal, that's right I said it, we voted for it here in Oregon, I wish that are government would respect the voters rights, for myself and many others out there marijuana is just as illegal as it ever was, we are the working men and woman paying the bills, we are still drug tested the same way we always have been, and if are employers detect that we have the slightest amount of marijuana in are system, are life will be destroyed, and we will be punished and in most cases fired, It wouldn't matter if I said I was using marijuana for medicine, I would be just as fired, please let me in on the secret? how do so many people get away with smoking marijuana, where do they work? people have to work somewhere, right? how do these people support them selves? let me know all go to work there to.

The vast majority of employees are never tested or your tested only when you change employers. I would like to see a statistic showing what percentage of employees are drug tested in a year. I have found that pure CBD oil works very well to control chronic pain. There is no THC, which is what is tested for so it does not show up in drug tests. New York State has a program where you can get vaporizer cartridges with and without THC. It is expensive though.

Bradley you are wrong about CBD .It shows up almost the same as THC and will get you fired right now but they are developing a new detector that will be able to be used properly even in traffic stops by the police just like an alcohol tester but it is not fully employed yet so the risk is still there .Currently they both show up because they are still hemp products !

Simple, move to Washington, Oregon, Colorado, or California, after Jan 1st. All these or any other state that has legalized pot. There are many industry related jobs.

Forget about Jeff Sessions, he cannot stop what's about to happen in the Marijuana industry, now let's make some money.

Please let us know the name and authors of the study of University of Indiana. The addiction of one substance increase the addiction of other substances. Marihuana is not the exception (I could send you several references showing an increase in addiction to MJ in last decade in USA and isn't relation to increased alcoholism and other comorbid addictions). Also in legalized states the increase in fatal car accidents driving under influence of MJ, emergency visits due to MJ and child dangerous Intoxication in Colorado Children hospital (about 10 each year). Please let the reader access the original study that you cited. The problem is the lack of understanding prevention and treatment of addictions. Tobacco is legalized and is the substance that kill more citicens each year in USA; more than alcohol, opioids and all other substances. MJ smoked has almost the same chemicals of smoked tobacco (about 4000 poisons identified). The losses of countries in legalized drug taxes vs expenses in health and loss of productivity are 10/1 for legalized substances due to lack of adequate prevention and treatment is addictions in USA. I may give any of these scientific references if you like. Thanks

I would much rather smoke weed than take opioids because of the side effects! I'm 50 years old and never heard of anyone dying of marijuana. But you hear of all kinds of people dying of opioids there has got to be a better way!!!!

You're right Basil, It doesn't matter what Jeff Sessions says. Too many people above him know the value of cannabis in medicine, as well as it's potential profit as a recreational item. Companies are already looking beyond its relevance as an employment factor.