But it wasn't just China that was fueling the sell-off over the last 24 hours in digital currencies. JPMorgan Chase & Co. (NYSE: JPM) CEO Jamie Dimon had a few gripes to share with the financial media over Bitcoin. 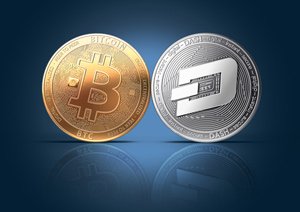 The CEO called Bitcoin a "fraud" and said that he would fire anyone who worked at his company who traded the cryptocurrency.

Below is a recap of the top cryptocurrency prices at 3:30 p.m. EDT.

On Wednesday, the total market capitalization of the entire cryptocurrency sector fell to $137.7 billion. Markets remain cautious in the wake of China's decision to shut down local exchanges and ban ICOs. Yesterday saw a brief rally, but the downturn accelerated after industry thought leaders like Bruce Fenton and Charlie Lee acknowledged that rumors and murmurs about China's plans were in fact true.

The Ethereum price continued to weaken on Wednesday and has now fallen below the 50-day moving average, a bearish indicator for the cryptocurrency.

Prices hit a two-month low as markets continue to worry about China's decision to ban ICOs.

Ethereum has experienced a solid run in 2017 as many investors have purchased Ethereum for the purpose of buying other tokens with it.

Bitcoin Cash Falls Below $500 per Coin

Bitcoin Cash couldn't maintain support at the $500 level, and the token is now facing broader pressure. Prices still held up better than some of its rivals, but investors are taking a wait-and-see approach to what happens next.

Litecoin prices are down more than 30% from their all-time high of $92.00. Many had speculated that a downturn in Bitcoin and Bitcoin Cash would be a boon for Litecoin, which dubs itself as the silver to Bitcoin's gold.

However, a broader sell-off in the sector has punished all cryptocurrencies in similar ways. Litecoin rarely leads the market in price movements and has been following the general downward trend in recent trading days.

The Reserve Bank of India is now in focus as the central bank prepares to explore regulation for cryptocurrencies.

According to Reuters, the central bank is "not comfortable" with Bitcoin at a time that India has turned into the fastest-growing economy to see a surge in digital wallets and cryptocurrencies.

Blockchain developers argue that the technology is ideal for India as a means to establish an affordable network to provide digital financial services to the nation. However, the RBI does not like the fact that Bitcoin is a "private" currency, a sentiment that is shared by central bankers around the globe.

Up Next: A List of Cryptocurrencies So Bizarre You'll Think We Made Them Up