Bitcoin, Bitcoin Cash, Ethereum, and Ripple prices all dropped today by double digits. However, Litecoin prices were hit the hardest, falling over 20%.

The total market capitalization of the global cryptocurrency sector plunged by more than 20%, as leading voices in the financial markets questioned the valuation of tokens and cryptocurrency. This morning, Allianz's Chief Economic Advisor Mohamed El-Erian said that Bitcoin's price should be 33% to 50% of the $4,000 level it saw this week. 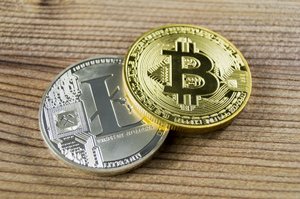 The statement comes at a difficult time for cryptocurrency investors. This week, China's central bank said it was banning initial coin offerings (ICOs), halting over-the-counter trading, and shutting down local exchanges. In addition, JPMorgan Chase & Co. (NYSE: JPM) CEO Jamie Dimon called Bitcoin a "fraud" and said that he would fire anyone in his organization who was trading it "in a second."

Below is a recap of the top cryptocurrency prices at 12:30 p.m. EDT.

On Thursday, the total market capitalization of the entire cryptocurrency sector fell to $117.7 billion. The downturn coincided with news that BTCChina – the second-largest Chinese Bitcoin platform and the world's third-largest platform – is shutting down on Sept. 30.

The company said in a statement Wednesday that it made its decision to "stop all trading" after "carefully considering" the decision by Chinese leaders. After the announcement, the National Internet Finance Association of China argued there was "no legal basis for platforms which engage in the trading of various forms of 'virtual currencies.'"

The Ethereum price fell below $250 on Thursday, sparking fears that the sell-off could accelerate in the weeks ahead.

The broader crackdown by Chinese government officials has Ethereum, and many other cryptocurrencies, plunging into bearish territory.

The regulatory ban on ICOs has hurt Ethereum, the blockchain platform on which many of these ICOs operate.

Bitcoin Cash was off more than 14% despite news that Bitstamp has confirmed that it has listed the cryptocurrency for trading.

Bitstamp is one of the first Bitcoin exchanges and the only trading platform regulated in Europe. However, it wasn't enough good news to offset today's broader sell-off.

Litecoin prices collapsed more than 20% in the wake of the broader market downturn. For the last few weeks, we've heard several leading analysts argue that a downturn for Bitcoin and Bitcoin Cash would benefit Litecoin.

However, it's clear that Litecoin fans were not counting on China to make this big announcement and pummel the broader sector. Litecoin prices are now down nearly 50% since they hit an all-time high on Sept. 2, 2017.