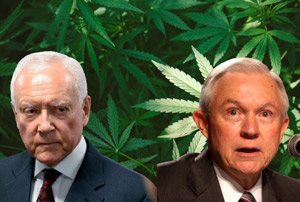 "It's high time to address research into medical marijuana," said Hatch. "Our country has experimented with a variety of state solutions without properly delving into the weeds on the effectiveness, safety, dosing, administration, and quality of medical marijuana."

Hatch is no average senator. As Senate president pro tempore, he is third in line to the presidency behind Vice President Mike Pence and Speaker of the House Paul Ryan.

And now, he's leading the bipartisan effort to force Attorney General Jeff Sessions to "increase the national marijuana quota in a timely manner to meet the changing medical, scientific, and industrial needs for marijuana."

What Is the MEDS Act?

The Marijuana Effective Drug Study Act of 2017, or MEDS Act, aims to improve the process for conducting scientific research on marijuana as a safe and effective medical treatment.

The MEDS Act will encourage more research by streamlining the research registration process as well as make marijuana more available for legitimate scientific and medical research.

The Act is in direct opposition to Sessions' stance on marijuana legalization. Sessions has long held the view that "good people just don't smoke marijuana" and has been a staunch opponent of legalization in any form – recreational or medicinal.

But should the Act pass, Sessions will find his hands tied.

That's because the Act requires the attorney general (Sessions) to increase the national marijuana quota. He won't have a choice in the matter.

And Sessions is already feeling the heat from legislators when it comes to marijuana legalization.

Just last month, the Senate Committee on Appropriations – the committee that determines spending legislation in the Senate – voted to reapprove the Rohrabacher-Farr Amendment, which keeps Sessions far away from medical marijuana.

In essence, the amendment blocks the U.S. Department of Justice (DOJ) from using any federal funds to go after medical marijuana patients and businesses in states that have legalized marijuana.

Being unable to enforce his anti-marijuana stance on the whole country seems like the least of his worries. If the MEDS Act passes, Sessions will be forced to take action that makes it easier for marijuana to be used for medical purposes.

That would be a huge relief for thousands of people across the country – especially those suffering from chronic pain.

"We're at the beginning of a sea change in how we treat chronic pain, shifting from opioid-based ones to cannabis-based ones," said Money Morning Director of Technology & Venture Capital Research – and renowned cannabis industry expert – Michael Robinson on June 28.

Should the MEDS Act pass, more medical marijuana researchers will have the ability to freely research and develop new medicines, like this one…

17673 Reads
These 3 High-Yield REITs Pay 8%, 10%, and 12% Dividends
REITs produce gobs of cash from rent and other fees generated from properties including office buildings, storage units, multifamily units, and more.