He claims that the danger of strategic miscommunication between these two parties grows likelier by the day, reported The Sydney Morning Herald on Aug. 14.

And to keep WWIII from breaking out in Asia, Rudd believes that Beijing and Washington will have to come to a "grand bargain."

A "grand bargain" is a diplomatic strategy the former Australian PM came up with himself. And its success requires one dramatic prerequisite…

That America and China should come to the bargaining table willing to give up something they don't want to.

The 3 Steps to Avoiding War with North Korea 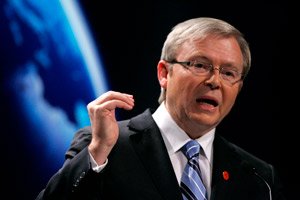 At a conference of diplomats on Aug. 31 at the Swedish Institute of International Affairs, Rudd laid out the three steps Beijing and Washington must follow to truly see North Korea de-weaponized…

"First," he said, Beijing will need to accept that "the threat of a unilateral U.S. strike [on North Korea] is credible enough to warrant a change in Chinese diplomacy towards North Korea."

Second, according to the former PM, "The U.S. would need to be clear with Beijing about what is at stake here for China. And if China succeeds in bringing about a cessation of North Korea's nuclear program, and the destruction of its existing arsenal, the U.S. would then accept [certain measures in return]."

Those measures would be, as outlined by Rudd:

The third step is actually meant to be a "stepping stone" – an interim action taken while trying to achieve the above measures: "A variation of the mutual freeze option currently mooted by China."

A "mutual freeze" is precisely what it sounds like: a complete halt of military actions agreed upon by both sides in a conflict.

China proposed such a freeze on March 8, in an attempt to get North Korea to freeze its nuclear and missile programs in exchange for a halt to major military exercises by American and South Korean forces. The proposal was denied within hours by Washington and Seoul.

Rudd recognizes the fragility of such a measure.

"Unless the other elements of the grand bargain are realized, resulting in the verifiable destruction of the existing North Korean arsenal, an interim step (i.e. the mutual freeze option) would not hold," he said.

Upon reading Rudd's plan, Money Morning Executive Editor Bill Patalon declared it "fascinating." In fact, he said that it might be "the best option of all."

But, he added, "I just don't see it with the current administrations in power in Beijing and Washington."