After a massive 8.7% rally since July 7, gold prices were due for some weakness. That weakness finally arrived last week, as prices dropped 1.9% between Friday, Sept. 8, and Friday, Sept. 15.

Fortunately, I had been warning investors that we should expect a pullback…

I said those gains had to be digested. I also pointed out that the U.S. dollar had sold off too far, with the U.S. Dollar Index (DXY) falling to a 32-month low of 91.35 on Sept. 8. Since it had become technically oversold, we were due for some sort of near-term bounce, and now the DXY is back up to 91.88 today (Monday, Sept. 18).

Both the DXY rebound and gold price correction are still running their course. I think we could see more consolidation, or even a bit more weakness, for the gold price in the interim.

But this decline will be brief, as gold prepares to resume its uptrend. Today, I'm going to show you just how much more gold prices will rally through the end of the year.

Before I get into my gold price forecast, let's look at gold's performance last week…

Tuesday was more of the same behavior, as gold prices endured weakness early in the session before recovering by the close. They opened lower at $1,325 and climbed higher throughout the day, settling back at $1,351 for no gain.

Here's a look at the DXY's strength last week… 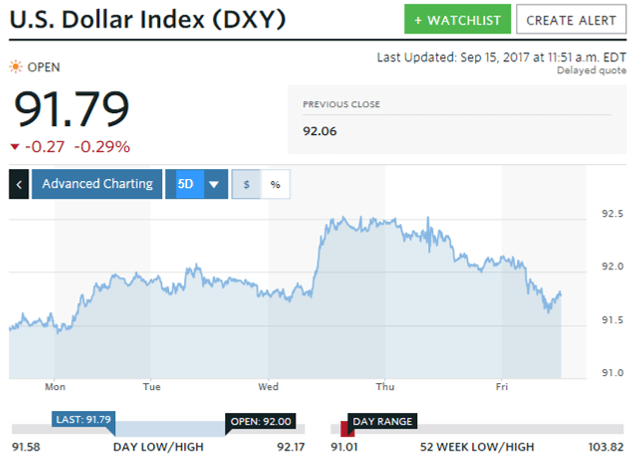 Right now, all eyes are on the dollar to see if it can actually maintain this rebound from two-and-a-half-year lows. I think it could keep pushing higher in the short term, but it should start to lose steam as we get deeper into the last quarter of 2017. This will open up some profit opportunities for gold investors.

Here's my bullish gold price target for the end of 2017…