Just as I suggested in last week's update on the price of silver, the metal has decided to retreat from its five-month highs. It posted a 2.3% loss last week and is down another 2.1% so far this week.

Since peaking recently at $18.12 on Sept. 12, the technical indicators for the silver price showed the metal was overbought and therefore due to dial back. That's what we've gotten over the last week, with silver falling 5.3% from that Sept. 12 high to close at $17.16 on Monday, Sept. 18.

So, has the silver price correction run its course yet?

While the technical indicators show it's no longer overbought, I think we may keep seeing a bit more weakness and at best a consolidation. But this is just a healthy short-term pullback, which will make way for silver to return to its bullish price action.

In fact, I think silver prices could rebound 27% from today's current level through the end of the year. And I'll show you why I'm so confident in my bold prediction.

After settling at $18.12 on Friday, Sept. 8, silver kicked off the week with little excitement. The metal trended steadily throughout the day on Monday, Sept. 11, eventually ending the session at the previous closing price.

Tuesday was more of the same for the silver price, as the dollar remained steady throughout the session. The U.S. Dollar Index (DXY) – which measures the dollar against other currencies like the euro and yen – hovered mostly near 91.75 the entire day. This caused silver to close at $18.12 for the third consecutive session.

On Wednesday, Sept. 13, the DXY went ballistic, popping from 91.8 to 92.5 in a matter of just three hours. Since silver is priced in the dollar, any rise in the DXY makes the metal more expensive to users of other currencies. This reduces demand and thus drags prices lower. 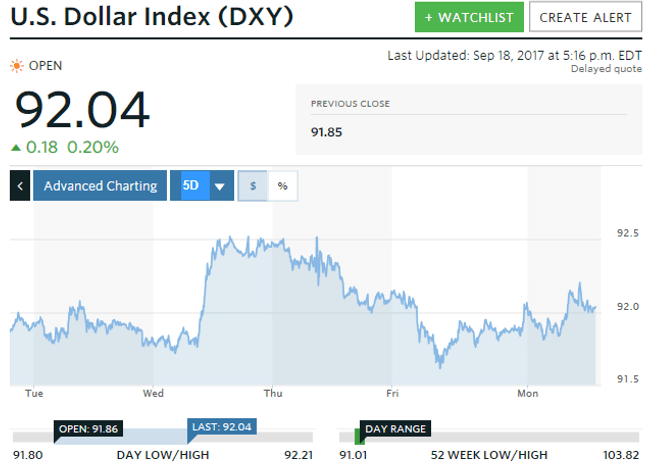 The dollar steadily retreated toward the 92 level on Thursday, but it wasn't enough to boost silver prices. The metal declined another 0.4% that day to settle at $17.79.

Friday saw both the DXY and silver backtrack once again, with the former hitting a bottom near 91.60. Meanwhile, the price of silver fell to $17.70 by the close, marking a 0.5% loss on the day. With that, the metal posted a weekly loss of 2.3%.

The silver price began this week with a huge drop on Monday, Sept. 18. As the dollar regained the 92 level and the S&P 500 notched an all-time high, investors moved away from safe-haven metals like silver. The metal plunged 3.1% to close the session at $17.16 – the lowest finish since Aug. 25.

And the silver price today continues yesterday's small rebound. Prices are up 0.3% and trading at $17.32.

As you can see, the dollar's strength has been largely responsible for silver's 4.4% drop since the Sept. 12 high. The DXY was expected to rebound from its 32-month low of 91.35 on Friday, Sept. 8, and that's exactly what it's done since then.

While this could keep happening in the short term, my long-term outlook is much more bullish. I see silver gaining 27% from here through the end of the year.