One of North Korea's most powerful weapons isn't a nuclear warhead, but its ability to use the Bitcoin cryptocurrency to mitigate harsh international economic sanctions. 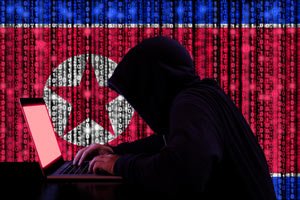 As the noose has tightened over the past decade, North Korea has been forced to become more creative in finding ways to get around the sanctions. And Bitcoin, with its decentralized network outside the control of any government, has proven an able tool.

In some ways, North Korea's adoption of Bitcoin as a weapon was inevitable.

Since assuming power in 2011, leader Kim Jong Un has ramped up the verbal threats to South Korea, the United States, and Japan, while punctuating those threats with a series of nuclear tests and missile launches. The most recent incident was just one week ago, when North Korea launched a ballistic missile over the northern Japanese island of Hokkaido.

The global community has responded with ever-tougher sanctions. Restrictions on trade as well as restrictions on North Korea's access to the international financial system have made life difficult for the rogue nation.

The U.S. State Department has estimated that the UN sanctions passed in August 2017 alone would chop one-third from North Korea's $3 billion in annual export revenue.

Desperate to find new sources of cash, the rogue regime fell back on strength it has nurtured for nearly a decade - cyberwarfare...

How North Korea Uses Cyberspace to Level the Playing Field

Despite its hot rhetoric, North Korea knows it can't confront a superpower like the United States directly.

"Since North Korea is militarily and economically inferior to its adversaries, it needs to use capabilities that can deter foreign aggression, coerce others, and project power without inviting a conventional response," Frank Aum, a former advisor to the Department of Defense on North Korea told Wired in June.

That can come in the form of a weapon of fear, like nuclear bombs, or a weapon of stealth, like cyberwarfare.

A relatively small cyber army can have a disproportionate impact. One group of elite hackers within the North Korean military, Unit 180, is estimated to consist of just 6,000 people. Another, Unit 121, has only 1,800.

That's because most attacks are conducted from countries like China, Malaysia, and sometimes locations in Eastern Europe. The North Korean hackers go undercover as employees of ordinary companies and get the bonus of better Internet service to carry out their attacks.

North Korea's interest in cyberwarfare dates back at least a decade but began in earnest around 2009.

At first, North Korea's efforts focused on stealing information from, and disrupting the systems of, foreign governments and corporations. Much of it is directed at South Korea, although the regime targets the United States, as well.

One of the regime's better-known attacks occurred in November 2014, as Sony Corp. (NYSE ADR: SNE) prepared to release "The Interview," a film that parodied Kim Jong Un. North Korea hacked Sony Pictures Entertainment, released information it had stolen from the studio's computer systems, and threatened terrorist attacks unless the film was pulled.

One of North Korea's most spectacular successes happened last year, when its hackers stole $81 million from the Bangladesh central bank - money that was sitting in an account at the New York Federal Reserve.

Cybersecurity firms such as Symantec and Kaspersky say the North Korean cyber army has cracked the SWIFT protocol that enables bank-to-bank transfers. These attacks have raked in millions of dollars from more than a dozen countries.

"They changed after Sony by using hacking to support criminal activities to generate hard currency for the regime," James Lewis, a North Korea expert at the Center for Strategic and International Studies, told Reuters in May. "So far, it's worked as well or better as drugs, counterfeiting, smuggling - all their usual tricks."

North Korea doesn't limit itself to big fish, either. In a report released in July, South Korea's Financial Security Institute said North Korea's hackers have targeted online gambling sites as well as ATMs. The ATM hacks yield bank card information that hackers can sell or use themselves to withdraw cash.

Given these successes, it makes perfect sense that North Korea's cyberwarriors would next set their sights on Bitcoin and other cryptocurrencies.

Here are the surprising schemes they've managed to pull off so far...

I want to know more about cryptocurreny.

Very believable research and report. makes you want to run and invest.