The value of "cashless banking" transactions is expected to grow 716% by 2022, and we're giving you the best stock to buy in the industry so you can capitalize on that massive growth potential…

"Cashless banking" is an emerging sector of the financial industry that lets you use your mobile devices to make payments and other financial transactions. 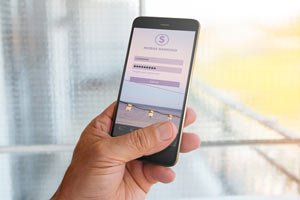 The value of mobile transactions around the world is expected to grow to over $865 billion by 2022. That's a 716% increase from the current value of around $106 billion.

"Trips to brick-and-mortar locations are going the way of the Dodo bird," Sid said.

Cashless banking allows users to "simply use their mobile device to take a photo of a check and upload it straight to the bank, rather than having to trudge to the branch, find parking, and wait in line."

Profit from the Cashless Banking Industry with Today's Stock Pick

Our stock pick is a company that protects mobile banking transactions from hackers, which is essential to maintaining the public's trust in the cashless banking industry.

The number of data breaches in general has been rising in recent years, too. The Identity Theft Resource Center reported U.S. companies and government agencies suffered 1,093 breaches in 2016 – up 40% from 2015. This came despite an 8.1% increase in global cybersecurity spending over the same period, according to researcher IDC.

Hackers will undoubtedly try to target cashless banking as the number of mobile transactions increases. According to Sid's research, nearly 2 billion people – or 26.7% of the world's population – will be using their mobile devices for banking transactions by 2019.

That could add up to 285.7 million transactions a day if every one of those people makes just one transaction a week.

"That's a whole heckuva lot of opportunities for hackers to intercept your banking information as it travels through 'secure' networks," Sid said.

But the company we're about to recommend offers the encryption and protection that keep those millions of transactions safe. Sid says it's the best stock to own as mobile banking explodes over the next five years.