The farms of the future use absolutely no soil and 95% less water. 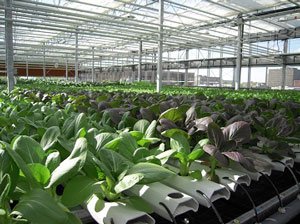 Urban farms are so efficient, just half an acre can yield the same (and in some cases, more) harvest than over 10 acres of traditional farmland.

No wonder these urban farms are sprouting up all over the country. There's at least one urban farm in almost every major city today. In some cities, like New York City, there are more than 20.

But here's the downside…

Urban farming isn't something average investors and traders can directly invest in, and likely won't be for a while.

You see, most urban farming ventures get their funding from venture capitalists. For example, AeroFarms Corp., one of the largest urban vertical farming companies, just secured $20 million for its latest indoor farm all from one round of venture funding.

And the company has not made any plans to go public as of yet. Instead, the company is planning to work with Goldman Sachs Group Inc. (NYSE: GS) and Prudential Financial Inc. (NYSE: PRU) to raise more than $70 million over the next five years in order to build 25 new farms – a 177% increase from the 14 farms it has now.

Still, there's a way for investors to profit from this burgeoning technology. Check out the video below…

Up Next: Energy's $48 Trillion Holy Grail

A shocking discovery has unlocked a 36,000-year supply of free energy.

Not only is this fuel source endless, it's ready to use immediately.

The U.S. Department of Defense just invested $7 billion in a single day, igniting an early-stage "energy boom" that will likely mint millionaires at a dizzying clip. Find out exactly how to play it here…