But don't expect that weakness to continue much longer. Once again, last week was all about the U.S. Federal Reserve and the dollar when it came to downward gold price movement.

Despite U.S. President Donald Trump warning during his UN speech Tuesday that he would "totally destroy" North Korea, gold prices remained mostly flat. They closed at $1,311 on both Monday and Tuesday last week.

The metal saw a 0.5% gain on Wednesday after the Fed announced plans to start shrinking its $4.5 trillion balance sheet next month. It will do this by simply not renewing maturing bonds to the tune of $4 billion in mortgage securities and $6 billion in Treasury bonds each month. These amounts will ramp up each quarter to reach $20 billion and $30 billion, respectively.

The Fed also said it would keep the benchmark interest rate unchanged between 1% and 1.25%, while indicating another rate hike was still possible in December. Eleven of the sixteen officials considered a 25 basis point (0.25%) increase "appropriate" by the end of 2017.

But I expect this dollar strength to be temporary. The greenback can't maintain strength as disinflation – or the reduction in the rate of inflation – remains present and shows no signs of leaving.

That means the dollar will likely remain weak. And that implies a rebound for the price of gold through the end of the year.

Before I show you my bullish gold price targets for the end of 2017, here's a closer look at gold's 2% decline last week…

Tuesday's action was quieter, as the U.S. Dollar Index (DXY) – which measures the dollar against other currencies like the yen and the euro – traded in a tight range between 91.90 and 92. Gold traders hardly budged ahead of the Fed's statement release the following day. The metal closed the day flat at $1,311.

Then the Fed announced Wednesday that it would unwind the balance sheet, which sent the DXY rocketing higher.

Here's how the DXY moved after the Fed's 2 p.m. statement… 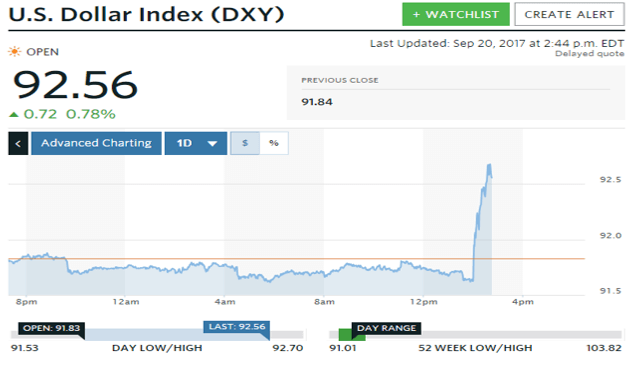 As expected, this simultaneously dragged the price of gold roughly 1.4% lower in about 30 minutes…

Their movements were nearly perfect mirror images. The dollar soared as the market interpreted the Fed's statement as hawkish as quantitative tightening – or the Fed unwinding its $4.5 trillion balance sheet – would begin in October and that another rate hike was expected by the end of 2017.

But the metal suffered on Thursday even as the dollar fell back to 92.26 that day. The price of gold opened lower at $1,292 and traded close to that level throughout the rest of the session. It settled 1.6% lower at $1,295.

The dollar's rebound from the two-and-a-half-year low on Sept. 8 has dominated the gold price narrative. Since that date, gold has fallen 4.1% to today's $1,296 price.

I think the dollar will continue to be the most important factor to watch for gold moving forward. Although the DXY may continue higher from here in the short term, I see it eventually falling back and giving way to a strong surge in gold prices by 2018.

Price of Gold Could Reach This Bullish Target Before 2018

I agree with your assessment, what gold and platinum stocks say under $30 would you think to be a wise investment? Would you buy ETF's? Thank you Jackie