Litecoin prices today and other major cryptocurrency prices got a boost from regulatory support offered by the Trump administration. 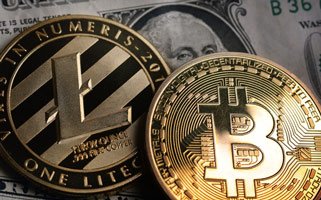 At the Data Transparency 2017 conference, two senior officials from the White House stressed the nation's commitment to using distributed ledger technology. The Office of Management and Budget (OMB) sees the blockchain as a way to streamline government operations, reduce bureaucracy, and improve communications with constituents.

The statements are viewed as positive to the cryptocurrency sector in the wake of China's regulatory crackdown and negative sentiments shared by Wall Street CEO Jamie Dimon. The JPMorgan Chase & Co. (NYSE: JPM) leader called the cryptocurrency a "fraud" and predicted that it would collapse in the future.

But it's interesting to see that someone else from the "Morgan" family name just offered some positive views on the matter.

On Wednesday, Morgan Stanley (NYSE: MS) CEO James Gorman said that he thinks Bitcoin is "more than just a fad."

During a talk at the World Economic Forum, Gorman said he found the concept of an anonymous currency with privacy protections "interesting" and understood why people were speculating on the Blockchain technology.

Below is a recap of the top cryptocurrency prices at 12:00 p.m. EDT.

On Thursday, the market capitalization of the total cryptocurrency market hovered at $142.9 billion. Markets were also reacting positively to news that Overstock.com Inc. (Nasdaq: OSTK) will have an initial coin offering exchange that will meet compliance rules of FINRA and the SEC.

The most volatile coin today has been Zcash, which surged above $400 and then quickly slumped back below $300.

The coin has been spinning on rumors that it could be listed onto additional South Korean exchanges in the near future.

The Bitcoin market capitalization topped $68.5 billion as traders continued to pile capital back into the sector.

The price surpassed $4,100 as volumes recovered and more traders shrugged off concerns about China's recent regulatory crackdown on the cryptocurrency sector.

The cryptocurrency has now erased all of its losses since JPMorgan CEO Jamie Dimon criticized it.

How to Find the Best Bitcoin Exchange for You

How North Korea His Weaponized Bitcoin

Who Are the Richest Bitcoin Millionaires?

The Ethereum price was able to tick back above $300 on Thursday before giving back some of its gains.

The price is up almost 50% from the September lows, but markets remain wary about the impact of China's ban on ICOs on the blockchain.

The price of Ripple slipped more than 4.7%, parsing gains from Wednesday's session. Traders were taking some gains off the table after a big week for the fourth-largest token by market capitalization.

Prices jumped nearly 20% after the firm behind the coin announced it was opening an office in Singapore. The new location will give the firm proximity to the booming Asian cryptocurrency markets.

The firm has pitched the Proshares Bitcoin ETF and the ProShares Short Bitcoin ETF. The company plans to create exposure to the cryptocurrency markets by establishing derivative contracts. It will be interesting to see how government officials view these concepts, considering that they have said Bitcoin is a tradable commodity.