The legal marijuana industry is growing like a weed. 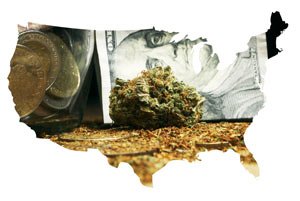 We're not just saying that to be cute.

We've already told you about the industry's genius partnerships with other billion-dollar industries and its role in the fight against opioid dependency.

And last week, Money Morning Director of Technology & Venture Capital Research - and renowned pot stock expert - Michael Robinson shared with you his four high-profit predictions for the industry in 2018.

But if you're still unconvinced, we've found five shocking statistics that show just how lucrative the marijuana industry really is.

According to Marijuana Business Daily, there are already between 165,000 and 230,000 Americans working in the cannabis industry. That's more than the amount of dental hygienists and bakers in the entire country.

In fact, there will be more people selling, growing, modifying, and running experiments with marijuana than there will be telemarketers or even pharmacists by 2021.

With four new adult-use states and six newly approved medical programs introduced just in the last year, the industry (and its employees) will surely see a huge boon.

Public Support for Marijuana Legalization Is at an All-Time High

A recent CBS News poll shows support for marijuana legalization is at a record high.

According to the poll, 61% of Americans support legal marijuana use, compared with 56% last year. 81% favor medical marijuana use. This sentiment has increased each year CBS News has measured it since 2013, with the turning point to majority support coming in 2014. Back in 1979, this same poll found just 27% said it should be legal.

Don't Miss Out: For marijuana industry updates in real time, sign up for Profit Alerts here.

The poll results also brought bad news for U.S. Attorney General Jeff Sessions, a longtime, staunch opponent of marijuana who has advocated for stronger legal punishments against marijuana businesses - even in states that have approved it...

The marijuana industry is far too entrenched to turn back now.

States that have passed legalization measures are growing dependent on the budding industry - and for good reason.

States that have implemented legal pot sales have seen the incredible value of marijuana through the tax revenue created, which is then used to fund previously destitute infrastructure and education programs.

For example, Colorado was able to put $16 million toward Affordable Housing Grants and Loans in 2016 from cannabis tax collections.

It's hard to imagine any state government wanting to part with all that much-needed cash.

"The discovered revenue from regulated legal cannabis markets can be a lifesaver to local law enforcement, substance abuse counseling, and other social services," said Leslie Bocskor of Electrum Partners, which provides advisory and consulting services specializing in the legal cannabis industry, to Forbes.

The reliance of local governments on marijuana businesses is a game changer. State governments will fight tooth and nail to protect these "lifesavers" because without them, they may not have the means to fund infrastructure, schools, and other public programs that are always going to need extra capital.

29 States Have Legalized... and Counting

After the vote, almost a quarter of U.S. citizens now live in states where recreational marijuana use is legal.

And there will be six more states legalizing marijuana in 2017, if predictions are correct. Delaware, Rhode Island, New Jersey, Virginia, Kentucky, and New Mexico are all expected to pass legalization measures within the coming months. That would bring the total number of states with legal marijuana to a whopping 35.

And as more states legalize, the profit opportunities for them (and investors) are only getting larger.

The Marijuana Industry Is Projected to Top $22 Billion

"We need more people like you on the planet - keep up the incredible research you are doing - make it happen. My glass is always half full." ~Calvin M.

"Your column is absolutely fascinating. It makes me dream and feel hope." ~ Elizabeth R

And Arcview Market Research CEO Troy Dayton, with whom Michael recently met, says a compound growth rate of more than 20% a year will continue "for many years past 2021 as more states and countries legalize cannabis."

We've already seen how impressive the gains can be. This time last year, Michael released his "weed investor's bible," The Roadmap to Marijuana Millions. At the time, it was packed with 30 of his absolute favorite - and most profitable - plays in the still-booming legal cannabis sector.

And in addition to the five impressive stats we just showed you, Michael's looking at four key events on the horizon that could lead to even more profits for investors:

How can I invest now? Please send info to mary_walker56@yahoo.com

Aphria , Canopy Growth,Aurora,are my picks. Terra Tech Corp. Also looks good. Then there is Scotts Mircle Grow which is easier to invest in.

I want to invest on marijuana. Please give me how to do it.
Thanks.

how can I invest? jeffciaston@yahoo.com

How can I invest..

Please advise on where & How to invest in these stocks