If you're anxious about getting involved in marijuana penny stock investing, we have two tips that can help you avoid potentially dangerous companies.

Don't get us wrong, marijuana stocks can be profitable investments for people who can afford a bit of risk. For instance, Vapir Enterprises Inc. (OTCMKTS: VAPI) - which makes vaporizers used to smoke cannabis oil - has climbed 200%, from $0.01 to $0.03, in September. That means it's tripled its value in just one month.

But marijuana penny stocks are typically risky since they trade over the counter. This means they're listed on the pink sheets, or over-the-counter (OTC) exchanges, which aren't as strictly monitored by the SEC as the Nasdaq or New York Stock Exchange. That means they're capable of scamming investors without appearing on the federal government's radar.

In fact, one specific cannabis stock is under investigation by the SEC for lying to its shareholders. If this company is found guilty, investors are at risk of losing their money...

One of the most notable penny stock scandals this past summer involved CV Sciences Inc. (OTCMKTS: CVSI), also known as CannaVest. The SEC charged the firm with fraud back in June, stating CannaVest allegedly reported false information in one of its 2013 financial filings.

And the stock is down 10% since June after it was found that CannaVest CEO Michael Mona, Jr., reported the value of the firm's assets was higher than it actually is... 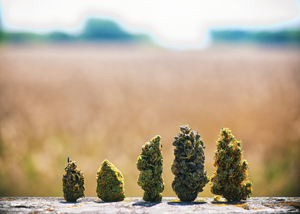 According to filings submitted to the SEC in the first half of 2013, CV Sciences acquired a hemp-based biotech called PhytoSPHERE Systems for $35 million. However, the SEC alleges Mona knew the acquisition price was much lower than $35 million.

In fact, the firm's Q3 2013 filing reported the PhytoSPHERE acquisition cost CV Sciences a mere $8 million. That was a stark 77.1% reduction from the originally reported $35 million. When the SEC noticed this, the agency found that Mona didn't acknowledge how the $35 million price tag was overstated in the first two quarters of 2013.

The SEC formally filed charges against Mona and CannaVest on June 16, saying this false recording was intentional and therefore grounds for fraud. Although the SEC hasn't yet suspended trading on CVSI yet, it likely will if the firm is found guilty.

Investors have clearly already lost all confidence in the business, and any more negative news could ruin the company. Corporate scandals are usually deadly for a company's stock price. For example, Valeant Pharmaceuticals International Inc. (NYSE: VRX) has crashed 94.4%, from $257.53 per share in July 2015 to $14.38 today. This downfall came after Valeant received several allegations of accounting fraud and drug price gouging.

These scandals can be even worse for penny stocks since they trade for less than $5 per share. With CVSI stock costing just $0.27, a quick rise in selling behavior could easily send the share price to $0. This would force CV Sciences to file for Chapter 11 bankruptcy and cause any remaining shareholders to lose their money.

While marijuana stock frauds like CV Sciences can entice you to avoid the cannabis industry altogether, investors who do so risk missing out on profit opportunities. There are simple ways to find out if a pot stock is safe enough for your money.

Here at Money Morning, we want to make sure you know how to invest in marijuana penny stocks safely. Today, we're going to show you these two easy ways to identify safe pot stocks to buy...