Money Morning Director of Technology & Venture Capital Research Michael Robinson has spotted two stocks to watch that are on their way to 100% gains since he first recommended them, and we had to make sure you got in on these profit opportunities now.

Wall Street is overlooking both stocks. The first is considered "boring," and the second is being overlooked despite its 13 quarters of stable sales growth. 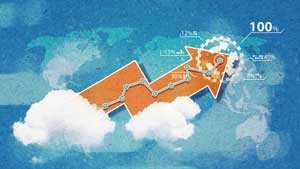 But we don't care about what Wall Street thinks. Its loss is our readers' gain. In fact, readers who took Robinson's advice when he first recommended these stocks are already up 32.89% and 23.14%, respectively. And that's just the start for the gains of these two stocks.

Before we get to the two stocks to watch now, here's more on Robinson's market-smashing track record...

Who Is Financial Guru Michael Robinson?

Michael is one of our most prominent and respected investing "gurus" here at Money Map Press - and for good reason. He is one of the top financial analysts working today. Make no mistake: Michael's ideas are completely his own. He's a true original. He works solely for Money Map Press... and receives absolutely no compensation from companies he writes about.

His book, "Overdrawn: The Bailout of American Savings," was a prescient look at the anatomy of the nation's S&L crisis long before the word "bailout" became part of our daily lexicon. He's a Pulitzer Prize-nominated writer and reporter, lauded by the Columbia Journalism Review for his aggressive style.

Now, as promised, here are your next two profit opportunities...

I have a hundred dollars in my broker account, do you have anything for me just starting out

David, I would like to know the same thing.