While the gold price reached a one-month low today (Monday, Oct. 2), it will rebound nearly 10% before the end of the year...

Last week, when the gold price rose back above the $1,300 level on Monday, Sept. 25, it was little more than a fake-out.

The decline came as investors moved away from gold and into stocks following the release of Trump's tax plan on Sept. 27. The plan's highlights include cutting the corporate tax rate from 35% to 20% and reducing the current seven tax brackets down to three.

As the Dow Jones gained 0.5% from the release to the end of the week, the U.S. Dollar Index (DXY) got a big boost. Although the index initially fell on Wednesday after the news, traders and investors saw the planned tax cuts as a boon to the American economy. This has lifted the DXY from 93.36 on Wednesday to 93.50 today.

Additionally, Federal Reserve Chair Janet Yellen also announced last Tuesday that strong jobs readings have increased the Fed's urgency to raise rates. The central bank has said it expects unemployment to fall from 4.4% in August toward an even 4% - the lowest jobless rate since 2000.

All of this dragged the gold price back below $1,300, where it has been since, confirming my view that the current rout isn't quite over yet.

I expect the oversold dollar to continue its bounce from the two-and-a-half-year low of 91.35 seen on Sept. 8. Since gold is priced in the dollar, any rise in the currency would lower demand from users of other currencies, which could limit any near-term gains in the price of gold.

But technical gold price indicators point to a recovery before 2018. Today, I'll show you my bold and bullish prediction for the metal through the end of the year.

Tuesday brought a reversal as the dollar came back strong on the back of Yellen's hawkish interest rate talk. The DXY climbed back above 93 for the first time in a month. Gold sold off, opening at $1,302 and closing at that same level for a 0.8% loss. 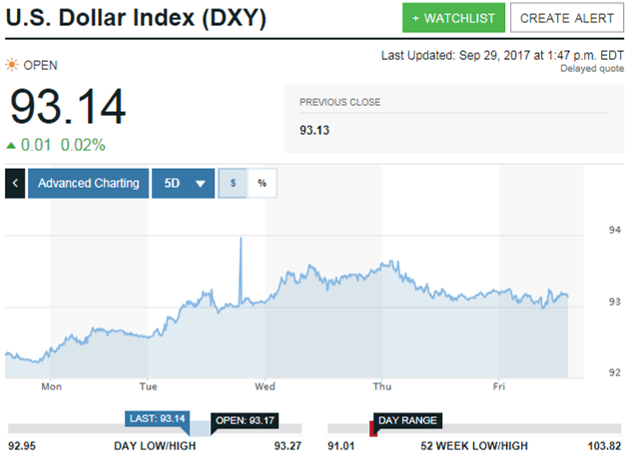 But the weakness returned on Friday despite the dollar moving sideways around the 93.10 level.  It seemed that the DXY was digesting its gains for the week. Gold prices opened at $1,288 and fell from there to settle at $1,285. That marked a 0.3% decline for the day and a 1% loss for the week.

As I mentioned above, I think the price of gold is in for more near-term weakness. The dollar is clearly gaining momentum, up to 93.50 today from the low of 91.35 on Sept. 8.

But I see this as just a dead cat bounce - a brief rebound before resuming its decline. Despite the DXY's recent gains, it's down over 9% this year.

Here's why I expect the dollar to fall before 2018 - and give way to a strong gold price rebound...

My Bullish Gold Price Forecast for the Rest of 2017

Dear Mr. Krauth, A 100% agree with your market view on gold and silver and when the markets dip a buy everytime bit by bit. What irritates me is that your colleauge Tom Gentile wrote an article that gold and silver have to take four hurdles before the market would be bullish again. I wonder whether this gentleman wrote this article by order of the Fed because the Fed is not served with higher precious metal prices. Slaves of the Fed are a couple of banks, no need to mention names, who are crimenally maanipulating these markets. So it upsets me really when in your middle(of Money Morning) somebody is writing bearish articles(that´s the way how I see it) ,just how the Fed likes to see it and may be other bankers who are short on gold and silver.

Always good to hear two perspectives. Ultimately we the listener get to decide what we believe is fallacy or not! Hearing nothing but what we want to hear makes us a potential sheep being lead to slaughter!