Access Your Profit Alerts
Sign Up for Money Morning and get your free report:
"The Best Stocks to Buy Now"
How to Buy Bitcoin
Twitter
Stocks: GEQU

Gold and silver prices are higher on bargain hunting and short covering, following recent selling pressure that pushed prices to seven-week lows earlier this week. A weaker U.S. dollar on this day is also favoring the gold and silver market bulls.

In overnight news, the Euro zone reported its composite purchasing managers index (PMI) came in at 56.7 in September versus 55.7 in August. A reading of 56.7 was expected. A number above 50.0 suggests growth in the sector.

Fed Chair Janet Yellen gives a speech Wednesday afternoon. Any comments she makes on the U.S. economy will be closely scrutinized for clues on the timing of future monetary policy moves by the Federal Reserve.

Traders and investors are looking ahead to Friday's U.S. employment report for September from the Labor Department. The key non-farm payrolls number is expected to come in at up 80,000. The unusually low non-farm jobs growth estimate is due to two major hurricanes that hit the U.S. mainland in September. 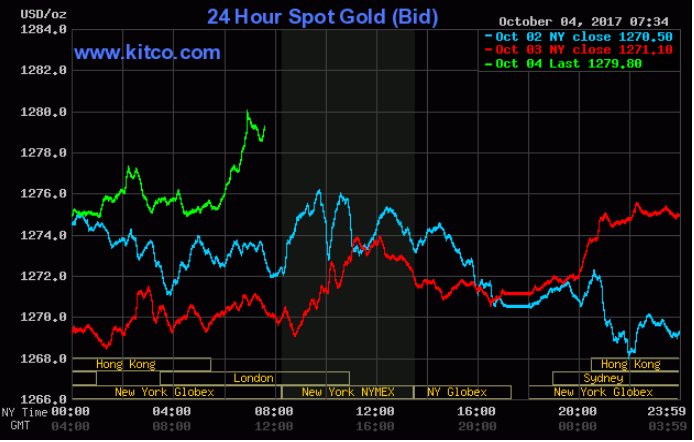 The U.S. dollar index is lower in early U.S. trading, on a corrective pullback after hitting a six-week high on Tuesday. The greenback bulls still have some technical momentum on their side.

The other key outside market on Wednesday morning sees Nymex crude oil futures weaker. While the oil bulls still have the slight overall near-term technical advantage, there are stiff chart resistance layers above the market.