Attorney General Jeff Sessions would have you believe that the federal government is at war with the marijuana industry.

But it's not even clear that everybody in President Donald Trump's cabinet feels that way.

Enter Linda McMahon, administrator of the Small Business Administration (SBA), whose job it is to support small businesses around the country. 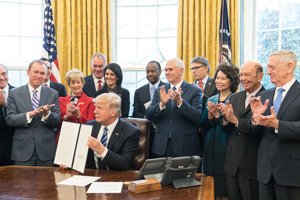 Her son, Shane McMahon, has a cool $500,000 stake in Connecticut-based marijuana company EnviroGrow. The startup sells equipment to marijuana growers in states where medical or recreational cannabis is legal. The company offers its services for marijuana growers "starting a new operation or looking to expand," according to its website.

Shane has since tried to detach himself from the company. But his initial investment in a company that sells to other cannabis-based businesses makes one thing crystal clear: He understands the growth potential of the marijuana industry.

And his mother has been appointed the federal authority on small businesses.

Here's what this could mean for the marijuana industry…

The SBA sets the guidelines for loans to small businesses. While the SBA does not make direct loans, it guarantees that these loans will be repaid, thus eliminating some of the risk to the lending partners.

Moreover, the SBA helps provide guidance and counseling to small businesses – something McMahon has been a fierce proponent of.

"Learning how to develop business plans, how to grow, how to pitch your business when you're trying to get investors, or to move into a different market are aspects of SBA that are not as well known," said McMahon to CNBC in June.

These hurdles are all too familiar for small marijuana businesses. Since marijuana is still illegal under federal law, small marijuana companies like local dispensaries are finding it nearly impossible to work with banks and gain access to funding.

As the new administrator of the SBA, McMahon could gear this marketing plan toward marijuana businesses.

Right now, of course, pot remains illegal under federal law. But lawmakers are in the process of trying to change that. In fact, just two weeks ago (Sept. 18), the California state legislature voted on a joint resolution urging the federal government to reclassify marijuana to further medical research and make it easier for small marijuana businesses to thrive.

If marijuana is reclassified as Schedule II or higher, or removed from the list of controlled substances entirely, we would see even faster growth in the marijuana industry.

And the federal government could benefit, too.

You see, states that have passed legalization measures are growing more dependent on the budding industry every year. They use marijuana tax revenue to fund previously destitute infrastructure and education programs needed by the community. For example, Colorado was able to put $16 million toward Affordable Housing Grants and Loans in 2016 from cannabis tax collections.

Should the federal government want a piece of the pie, revenue from legal marijuana sales could be used to wind down the national debt, help with the opioid crisis, or even fund President Trump's promised border wall. Not to mention the new jobs the industry is creating.

Moreover, "the discovered revenue from regulated legal cannabis markets can be a lifesaver to law enforcement, substance abuse counseling, and other social services," said Leslie Bocskor of Electrum Partners, which provides advisory and consulting services specializing in the legal cannabis industry, to Forbes.

Until now, it seemed the federal government would be the final obstacle to this kind of progress. And it very well could be; Administrator McMahon hasn't discussed her son's investments in public.

But interest in the marijuana industry is cropping up all over the nation, and it seems to be getting closer and closer to the White House.

The Future of the Marijuana Industry Is Bright

We've already seen how impressive the gains can be for marijuana investors. This time last year, Money Morning Director of Technology & Venture Capital Research – and pot stock expert – Michael A. Robinson released his "weed investor's bible," The Roadmap to Marijuana Millions. At the time, it was packed with 30 of his absolute favorite – and most profitable – plays in the still-booming legal cannabis sector.

But the gains are far from over.

Over the next 365 days, Michael's looking at four key events on the horizon that could lead to even more profits for investors:

I'm so glad we're starting to gain more widespread support for the medical and social — in addition to economic — value and potential of the marijuana industry. In our evidence-based society, declining legal and cultural opposition to cannabis will jumpstart high-quality research. And, as we know, science is king!

How can the federal government collect taxes on something they say is illegal?