That's when the "Shark Tank" star confirmed to CNBC's "Fast Money" that he is "actively considering" a run for the presidency in 2020. 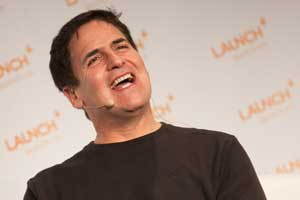 The fact that the multibillion-dollar entrepreneur confirmed he's thinking about a 2020 POTUS run seems to have been enough information for the mainstream media to start pumping out stories.

In doing so, many news outlets failed to cover what Cuban revealed within this announcement – something that shows what kind of leader he would be…

You see, Cuban made a specific point on "Fast Money" yesterday about U.S. President Donald Trump's corporate tax plan in particular – a criticism, to be precise.

"[Trump's corporate tax proposal] is based on the theory that cutting the corporate tax rate will help workers," the Dallas Mavericks owner said. "[But] if the goal is to increase Americans' incomes, politicians should either reduce the payroll tax or get companies to commit to increasing wages if they get a tax cut."

Get the latest out of D.C. – plus how to cash in on these moves – the second it's released with our free Profit Alerts. Learn more here.

In fact, he made this assertion almost verbatim at an Aug. 27 rally: "Lower taxes for American businesses means higher wages for American workers," President Trump claimed, according to The Washington Post on Sept. 27.

Just three days after Trump's corporate tax statement, on Aug. 30, the D.C.-based think tank Institute of Policy Studies (ISP) issued a report that found 92 corporations that already enjoy a 20% tax rate (there are a lot of loopholes in the current system that allow major firms big tax breaks right now) didn't spend the added capital from these low rates on hiring workers.

Nor did they use the money to increase worker wages, the ISP confirmed.

Instead, these corporations "eliminated jobs between 2008 and 2016, downsizing by a combined total of 483,000 positions," the ISP report states. That eight-year span, by the way, was a time during which corporations enjoyed lower tax rates in order to help get the U.S. economy out of its post-financial crisis slump.

This means that, while these businesses were granted the means by the U.S. government to hire workers and increase wages through low tax rates at a notably critical juncture in American history, they failed to do so.

But the stats get much worse…

These 92 corporations spent the majority of their tax savings instead on equity buybacks, which inflated CEO pay, reported the ISP.

It's this kind of corporate reality that spurred Cuban's criticism over Trump's tax plan. And he would know the gory details of the money-hungry big business world himself, being a multibillion-dollar entrepreneur and all.

But as far as getting corporations that enjoy low tax rates to also increase worker wages is concerned, Cuban told Business Insider on Sept. 29 that he would indeed lower payroll taxes for workers, or he'd "get a pledge from the top 5,000 profitable companies to increase wages of their hourly employees and lowest paid salaried workers by at least 10% and to not use any international funds that are repatriated for dividends or share buybacks."

That's a rather detailed corporate tax idea for someone who is 90% sure he won't run for president in three years' time.

But whether he runs or not, we'll have you covered.

For Better Portfolio Results, Listen to CEOs, Not Politicians

It's Better to Concentrate on CEOs Than on Politicians

Trying to make investment decisions based on politics could see your funds tied up in something "that might or might not ever happen," Keith added.

Take Jeff Bezos, CEO of Amazon.com Inc. (NYSE: AMZN), for example. Keith believes that, to Bezos, shareholder value is nothing more than a scorecard. What he really wants is industry leadership in every segment the company enters.

Noted by Bezos in Forbes last July, Amazon would rather improve the customer experience than prioritize and make "investment decisions in light of long-term market leadership considerations rather than short-term profitability considerations or short-term Wall Street reactions."

If only our politicians had such a long-term outlook.

Admittedly, at around $980 a share, Amazon is not cheap.

Buying a single 100-share round lot will set you back nearly $100,000, which is roughly equivalent to what it takes to pick up even a modest house these days.

They give investors the opportunity to earn aggressive monthly income combined with huge lump-sum payouts.

Then still grab six figures in one shot.

Either way, get on board.