The Bitcoin Gold hard fork, scheduled for Oct. 25, will create yet another alternate version of Bitcoin.

This comes in the wake of the Aug. 1 Bitcoin Cash hard fork. The BCH version of Bitcoin continues to exist as a separate cryptocurrency. 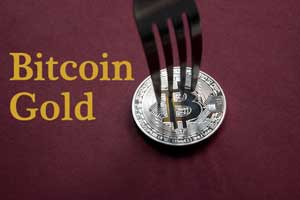 The Bitcoin Gold hard fork aims to do the same thing. Following the hard fork, the plan is for Bitcoin Gold to be a distinct and separate cryptocurrency.

And anyone who holds original Bitcoin as of Oct. 25 will receive an equal amount of Bitcoin Gold, just how it happened with Bitcoin Cash. Trading of Bitcoin Gold is to go live Nov. 1.

But hard forks are supposed to be rare. And Bitcoin Gold isn't the only hard fork expected in November.

The SegWit2x hard fork, intended to double the block size from one megabyte to two in the original version of Bitcoin, is expected to trigger near the end of November.

That means we'll have four competing versions of Bitcoin by the beginning of December.

With so many hard forks in such a short span of time, even veteran Bitcoin users are struggling to make sense of all this.

So Money Morning contacted two of the team members behind Bitcoin Gold to find out why this project was launched and what Bitcoin investors can expect...

The Reason for the Bitcoin Gold Hard Fork

I talked with both Robert Kuhne, Bitcoin Gold's volunteer organizer, as well as the Chinese lead developer, who goes by the nickname h4x.

Kuhne said the idea for Bitcoin Gold originated with Jack Liao, the CEO of LightningAsic, a Hong Kong-based vendor of cryptocurrency-mining equipment.

Liao had become concerned with increasing centralization among a handful of Chinese Bitcoin miners. Bitmain, in particular, dominates with control of about 30% of the network's mining power.

Bitcoin mining has become centralized because of the hardware "arms race" that has developed. While people could at one time mine Bitcoin using the GPU cards in PCs, that's no longer feasible. Bitmain and other companies built machines called ASICs, designed specifically to mine Bitcoin. These machines are very good at mining Bitcoin, but typically cost thousands of dollars - too much for casual users.

Bitcoin Gold puts casual users back into the equation by making it again possible to mine Bitcoin with the GPUs in PCs.

"The inspiration for Bitcoin Gold was to create a version of Bitcoin that is anti-fragile against mining centralization," Kuhne said. The only way to do this was through a hard fork.

But Kuhne also emphasized that Bitcoin Gold is not an attempt to supplant the original Bitcoin protocol. Rather, he said Bitcoin Gold should be thought of as an insurance policy against a future disaster caused either by mining centralization or hard forks seeking to overthrow the original, like Bitcoin Cash.

"I am a Bitcoin supporter above all else, and my primary motivation for backing this project is to defend Bitcoin," Kuhne said.

Nevertheless, skeptics in the Bitcoin community have raised a lot of questions about the Bitcoin Gold hard fork...

Details on Bitcoin Gold Haven't Been Easy to Find

Proposals of major changes to the Bitcoin protocol usually are accompanied by a flurry of publicly disclosed information. Typically, that means a dedicated website as well as a "white paper" that describes the proposal in detail.

Bitcoin Gold's website today is just a page with a logo, the Oct. 25 hard fork date, and links to its social media pages on Twitter, Facebook, and Slack, as well as a link to its Github page. There is no white paper.

Don't Miss: The Best Cryptocurrencies to Invest in Today

The project hasn't even set up its "testnet" yet, an alternative blockchain that developers use for testing new code before putting it on the "mainnet" for everyone else. The code for SegWit, for instance, ran on a testnet for 18 months before it was implemented in August.

Yet h4x told me the Bitcoin Gold testnet won't be up until the middle of this month, just a couple of weeks before the Nov. 1 launch. And while a white paper is planned, it won't come out until after the launch.

Which begs the question: What's the hurry?

"We are aiming to launch the fork before SegWit2x," h4x told me. "We believe SegWit2x and Bitcoin Cash are not the correct way to scale Bitcoin and have lots of bad properties."

The Bitcoin Gold team wants to have its "Bitcoin Plan B" in place before the SegWit2x hard fork - just in case.

Meanwhile, a group of HTML developers is working on the Bitcoin Gold website, which h4x said "should be ready in one or two days."

All that said, Bitcoin investors still need to know what to expect on Nov. 1 and how to get their hands on their Bitcoin Gold should they want to hold, sell, or trade it.

Here's what Kuhne told me...

What Will Happen with Bitcoin Gold After Nov. 1

Great source of concise up to date information