Marijuana Business Are Teaming Up with This Billion-Dollar Industry

This past summer, one pot penny stock news story showed just how easy it can be for tiny marijuana companies to defraud investors. But you can protect yourself – and your money – from these scams…

Money Morning subscribers won't be duped by these companies; they'll profit instead. That's because today we'll give you two tips on how to identify potentially fraudulent penny stocks.

The scandal involves CV Sciences Inc. (OTCMKTS: CVSI), also known as CannaVest, a medicinal marijuana company based in Las Vegas. Last June, the SEC charged the company with fraud related to false financial reports that the CEO intentionally reported in 2013.

Back in 2013, CannaVest was one of the best-performing marijuana stocks on the entire market. Shares surged from $5 to $40 during the course of the year, marking an incredible 700% gain. They eventually reached a record high of $69.90 in January 2014. 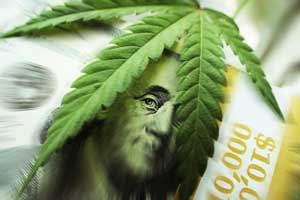 The stock is also down 10% since June 16, when the SEC alleged that CV Sciences CEO Michael Mona, Jr., overstated one of the firm's acquisitions that was filed during the first half of 2013. This led both the SEC and CVSI investors to think the company had more cash on hand for acquisitions than it actually did.

Mona specifically reported to the SEC his firm bought hemp biotech PhytoSPHERE Systems for $35 million. Mona allegedly knew the value of the acquisition was much lower.

When the company submitted its Q3 2013 filing, it recorded a different value for the acquisition – $8 million. This later caught the attention of the SEC, which claims the false recording was deliberate and therefore grounds for fraud. Since the SEC charged Mona and CV Sciences on June 16, the CVSI stock price is down 10% to $0.27.

Although the SEC hasn't yet suspended trading on CannaVest, it likely will if Mona and the company are found guilty.

If trading is suspended, investors could lose more than the 10% loss they've already seen since June 16. They could end up losing all of their initial investment because of the firm's irresponsible corporate conduct.

While marijuana penny stock scams like CannaVest can entice you to avoid the cannabis sector entirely, investors who avoid it can miss out on profits. That's why we want to show you how to determine whether or not a pot stock is safe for your money.

Our Money Morning experts are committed to ensuring you can safely invest in pot stocks. Here are two important tips for finding the safest pot stocks to buy…

I am anxious to learn more about which stocks to invest in.