The South China Sea dispute is about to morph into a superweapons war.

That's because the two main parties involved - the United States and China - are both global mega-powers with the means to create powerful new tools of war.

And as tensions mount in the ongoing South China Sea dispute, both nations have been crafting and honing their advanced weapons caches so as to one day inflict as much damage as possible on the other. 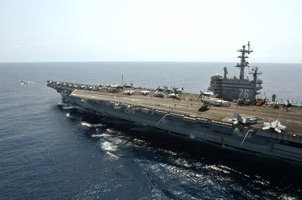 U.S.S. Ronald Reagan transits in the South China Sea as an F/A-18 Hornet launches off her catapult.

What's more, were a Beijing-Washington superweapons war to break out soon - and the likelihood of this happening grows by the day in the South China Sea region - it wouldn't play out like any war we've ever seen in the past.

Not when the battle would take place at sea as opposed to on land.

And the United States and China are each innovating a very specific kind of superweapon to prepare for a modern-day naval war...

These menacing aircraft can inflict just as much damage as any weapon we've seen before - including nuclear bombs - if not more.

Here's a look at the superweapon drone technology both nations are developing...

The U.S. Navy has not disclosed how long it has been working on swarming autonomous drone technology. But judging by the advanced capabilities these vehicles exhibited when they were first made public in January, it's clear that Uncle Sam's been building and finessing these little guys for years...

These particular drones, known as Perdix drones, have wingspans of just 12 inches. And they're used for patrolling - which may leave you wondering how they could be superweapons capable of mass destruction.

The answer: strength in numbers.

Perdix drones share a distributed "brain" with other members of their swarm (the Navy has roughly 100 vehicles in all, reported BBC on Jan. 10). They carry out missions utilizing "swarm behavior" maneuvers such as collective decision-making, adaptive formation flying, and self-healing.

When military officers "tell" these drones to patrol a particular area, they don't need to manually control their movement.

And once Perdix drones' patrols are complete, they send data back to base. If that data gives an "all clear" sign, step two of the U.S. superweapon drone fleet begins...

This is where the Reaper MQ-9 drone comes in.

The Reaper is the largest in the U.S. military's drone arsenal, with a wingspan of 84 feet and a payload capacity of 3,000 pounds and/or 500 bombs. 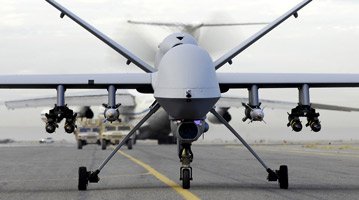 On top of all that, the Reaper is easily customized, which means the version of the drone that exists today is wholly different than the version that first appeared in 2001. It has top-of-the-line laser-guided technology, a much larger payload capacity than before, and the ability to fly 36 consecutive hours.

According to Daily Military Defense & Archive on Nov. 17, 2016, the U.S. Reaper drone still is "the most feared U.S. Air Force drone in action."

Together, the Perdix and the Reaper make a deadly combination.

China, however, purportedly also has a drone that instills just as much fear as the Reaper...

China's Drones in the South China Sea: Amphibious Vehicles and the CH-5

hi,
the military tensions are growing in Asian region as you know. but do we really know about it?
the big china wants the bigger china. strong USA doesn't want smaller USA. however, between this two who are in deeper crises? Chinese leader? or USA leader?. and or super investors. for these two leader, who has been facing a political crises recently. what does the Chinese leader wants from USA to cover his problems before the Communist party election day?
i think we need to wait until this party election day finishes to be able to know more about the progress of the North's Nuc fire works.