Investors might believe they can only buy shares of risky pot stocks, but our marijuana stock expert says that's not always the case… 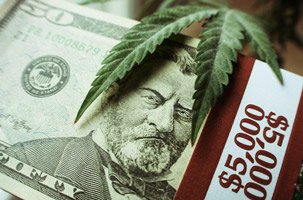 This company we are about to mention also trades on the New York Stock Exchange (NYSE), pays a dividend of $0.53 per share, and 67% of analysts covering it give it a "buy" or "overweight" rating.

Now, most investors wouldn't consider this a traditional pot stock.

However, this is what Robinson calls a "pick-and-shovel" play on the cannabis industry. Instead of investing in a company that sells marijuana, investors buy shares of a company that provides products or services to the cannabis industry. That's because the people making money during the famed California Gold Rush weren't the miners, they were the people selling them picks and shovels.

Growing marijuana plants is a labor-intensive project that requires high-tech equipment to grow the best products.

But outside of mass-scale pot farms, demand for equipment from cannabis-growing hobbyists will also increase.

California voted to legalize recreational marijuana in November 2016. As part of legalization, California residents 21 years or older can grow up to six marijuana plants in a private home as long as the plants are grown in a locked area not visible to the public.

Now, it's true marijuana is still illegal under federal law. But what makes this investment one of the "safest" investments in the marijuana industry is that the company we are about to mention will still be in business no matter what happens with cannabis laws.

It's operated since 1868, and it's one of the world's largest companies in its sector. It just happens to be branching into the explosive marijuana industry. This has already turned into a $250 million business for them.

With over 29 states legalizing medical marijuana, cannabis legalization has come too far to stop. Legal marijuana sales in North America are expected to skyrocket from $6.7 billion in 2016 to over $20 billion by 2020.

That's why, before the industry really takes off, we had to make sure you got in early on the "safest" marijuana stock to own right now…

This Is the "Safest" Way to Invest in Marijuana Stocks