The recent correction, which began on Sept. 12, continues to frustrate the gold bulls. After pushing all the way up to a one-year high of $1,351 on Sept. 12, gold prices were poised to fall from there.

In fact, gold's climb above $1,300 on Sept. 25 and back below that price the following session, as I discussed last week, caused even more sentiment damage.

By Friday, Oct. 6, the price of gold had dipped to "test" an intraday low of $1,260, just as I had predicted. But that lasted little more than minutes, as bargain hunters stepped in to boost the price to $1,275 by the close.

Have we now seen gold's interim bottom? I think it's set for a rebound from here, which is why I'm going to share with you my gold price targets for the rest of 2017.

First, let's examine last week's 0.8% decline and how it plays into the broader gold picture…

After closing at $1,285 on Friday, Sept. 29, the price of gold trended lower throughout the day on Monday, Oct. 2. This was a response to the rising U.S. Dollar Index (DXY), which measures the dollar's value against other prominent currencies like the yen and euro. As the DXY climbed from 93.08 on Friday to 93.56 by the close Monday, gold fell 0.7% on the day to settle at $1,276.

More overnight weakness was in the cards, but by Tuesday's open gold had steadied above the $1,270 level. The dollar moved mostly sideways on the day at 93.60, but this still caused the metal to post a daily loss. The gold price settled at $1,275 for a slight 0.07% decline.

On Wednesday, Oct. 4, gossip surrounding who would succeed Federal Reserve Chair Janet Yellen drove the dollar and gold price action. Talk of Jerome "Jay" Powell – considered more dovish than other front-runner Kevin Warsh – succeeding Yellen dragged the dollar lower, from 93.57 to 93.46. The price of gold responded positively, jumping 0.2% to close the session at $1,277.

Here's a look at the DXY's action last week… 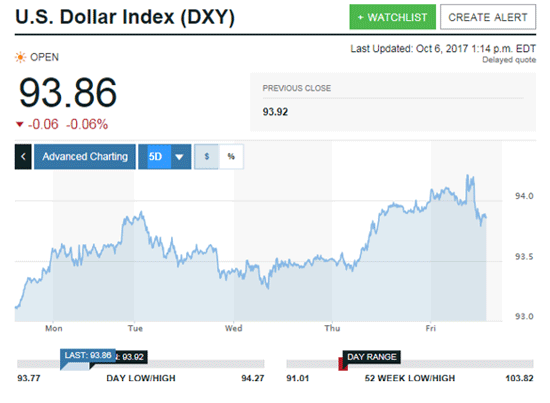 As I've said before, the dollar's recent rally has continued to control how gold prices move. The greenback's rise above the 94 level last Thursday was the highest since July 25. This marked negative sentiment for gold traders, who likely saw the two-month high as a sign of a continued rally for the dollar.

However, I think the dollar is due for a rest at this juncture, which would be bullish for the price of gold through the rest of the year.

My Gold Price Forecast for the Rest of 2017