Although it's rebounded 4.2% since September, we don't recommend buying Exxon Mobil stock for 2018. 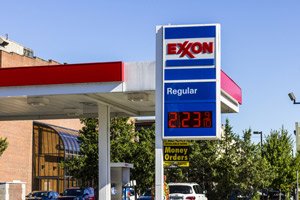 Instead, Money Morning Global Energy Strategist Dr. Kent Moors has picked a smaller oil stock that could benefit from a $1 trillion oil boom happening right here in the United States. This boom deals with one region of the country that has about as much oil as all of China.

Exxon Mobil Inc.'s (NYSE: XOM) 4% rebound over the last month can be attributed to the plunging U.S. dollar...

You see, Exxon had non-U.S. operations earning roughly $6.6 billion in the first half of 2017. When the company brings that foreign cash back to the United States, it's converted to dollars. If the dollar is stronger against other currencies, that bottom line can be much lower than expected.

Now that the dollar is extremely weak, investors think it signals more cash - and stronger earnings - ahead. The U.S. Dollar Index (DXY) - which pegs the dollar against the euro, yen, and several other currencies - fell to a 32-month low on Sept. 8. Since then, shares of XOM stock are up 4.7% to $82.55 today.

And that isn't the only reason we are not recommending Exxon Mobil stock today. In fact, there is one major problem on the company's balance sheet that's the biggest warning sign of all...

1 Big Reason Why Exxon Mobil Stock Is Dangerous to Own

What Is the Debt/Equity (D/E) Ratio?

The D/E ratio measures how much a firm is borrowing money to fund its operations or projects. A high D/E ratio shows the firm is aggressively growing its business with debt, which can result in poor earnings since the company is taking on high interest expenses.

If the cost of debt becomes too much for the firm to deal with, it can potentially lead to bankruptcy. This would leave the firm's shareholders penniless.

But Exxon's debt is much worse than the rest of the energy sector...

According to the latest data from stock researcher CSI Market, the entire energy sector's average debt/equity (D/E) ratio - which measures how much debt companies use to finance their business - is 0.06.

Taking on high levels of debt can temporarily boost earnings, but this strategy hasn't been successful for Exxon. As the D/E ratio has nearly doubled since June 2014, Exxon's annual profits have declined a massive 76% from 2014 to 2016.

With its debt levels continuing to outpace earnings, it's clear Exxon's business isn't growing right now even as oil prices are back above $50. That's why we advise against investing in Exxon Mobil stock.

That's why Kent - a globally recognized energy expert with over 40 years of experience - is recommending a different oil stock to buy today.

It's a midstream master limited partnership (MLP), which is a company that stores and transports oil. This type of "middleman" company makes money as long as oil keeps flowing from the producer to the seller, meaning it's hardly affected by oil price fluctuations.

But Kent also likes this firm because it's at the center of an oil revolution, which could yield upward of $1 trillion to the companies that get to it first...

WOULD LIKE NAME OF BEST MARIJUANA STOCKS .
ALSO THE NAME OF THE INTERNET OF THINGS TO INVEST IN.