Litecoin prices today surged 9% as investors poured money into "Bitcoin's gold." Bitcoin surged through the $5,300 barrier before retreating slightly in the afternoon, which helped to send up the price of Litecoin. 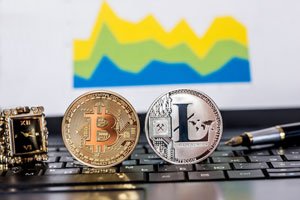 Out of the top 100 cryptocurrencies by market capitalization, Bitcoin had the 11th-highest return over the last 24 hours, while Litecoin had the eighth-best performance.

It was just a month ago that Bitcoin hovered below $3,000 per coin. Recently, rumors of a Goldman Sachs trading desk, increased buying on South Korean and Japanese exchanges, and bullish calls from some of Wall Street's biggest Bitcoin bulls have been pushing prices higher.

Below is a recap of the top cryptocurrency prices at 4:00 p.m. EDT

According to a Reddit thread, MonaCoin is "Japan's first original crypto" and "has a cult following."

The Bitcoin market capitalization hit an all-time high as prices rallied nearly 9% over the last 24 hours.

The price of Bitcoin is now up more than 80% in the last month, as investors continue to pile in on the world's largest cryptocurrency.

The Ethereum price wasn't able to keep up with its largest rival, as the cryptocurrency remains unable to break past a new psychological range.

The cryptocurrency has been hanging in a range between $282 and $315 for several days as markets appear to be taking a wait-and-see approach to its upcoming Metropolis upgrade.

The first step in this process will be the Byzantium upgrade slated for Oct. 16. According to CoinDesk, the company is struggling to meet this deadline.

Parity Technologies, which maintains the parity client that controls 25% of all Ethereum nodes, has not released the software required to ensure protocol changes.

The price of Litecoin surged nearly double digits as traders found a bottom in the market and traded on volume levels that nearly matched Ripple and Bitcoin, two cryptocurrencies with much larger market capitalizations.

Litecoin was rising in relation to Bitcoin's big bounce on the day.

The new service will allow users making direct purchases from U.S.-based bank accounts and in increments smaller than $25,000.

The service will expand to other nations in the near future. Coinbase users traditionally had to wait several days for their coins to arrive in their wallet.

This decision is based on significant customer feedback and complaints about customer service in the past.

I'm lucky I got in on Mona last week just before the gigantic surge. It's crazy to think that it's gone up almost 1000% in a few days. I just wish I put more on it.