The Bitcoin price is rising again as several catalysts have come together to drive its U.S. dollar value up 23% over the past week. 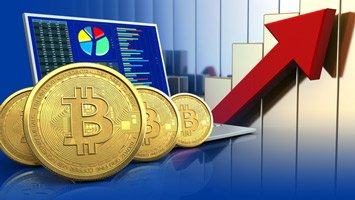 The latest Bitcoin bull run comes just one month after the Bitcoin price fell as much as 41% in two weeks. When critics in the media and Wall Street again called Bitcoin a bubble and pronounced it dead, I explained why they were wrong.

In fact, anyone familiar with Bitcoin's resilient history expected this rebound. The only question was the timing.

That's where the past week's catalysts come in...

Why the Bitcoin Price Is Rising Now

The biggest catalyst driving the Bitcoin price higher right now is the prospect of two hard forks over the next month or so. A hard fork is a split that creates a new, separate version of Bitcoin.

That would seem to be a bad thing, and in some respects it is. More versions of Bitcoin dilute the brand and confuse novice users.

But a Bitcoin hard fork also generates what's called an "airdrop." Anyone who owns some Bitcoin at the time of a hard fork receives an equal amount of the newly created version.

That's what happened Aug. 1 with the Bitcoin Cash hard fork. After that hard fork, many Bitcoin investors sold their "free" BCH for a profit. Bitcoin Cash has traded between $200 and $1,000 since then.

This Stock Could Skyrocket: A tiny $6 million company has just won in a shocking patent verdict. Now an imminent announcement could ignite a 28,700% revenue surge - and you can get in on the ground floor. Learn how...

So a person who held 10 bitcoins as of Aug. 1 could have pocketed as much as $10,000 from the Bitcoin Cash hard fork without touching any of their original 10 bitcoins. 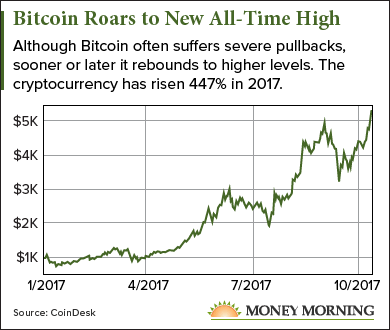 The race to buy Bitcoin has had an impact on the entire cryptocurrency space, with many coins falling as Bitcoin soared.

Typically, the majority of cryptocurrencies move in tandem with the Bitcoin price. But crypto investors eager to wring as much value as possible out of the Bitcoin hard forks have been reallocating their capital.

[Investing tip: After the hard forks are complete the process should reverse, with some of the airdrop money bolstering the prices of cryptocurrencies like Ethereum, Litecoin, and Ripple, as well as dozens of others.]

In addition to the hard fork drama, several other developments in the past week have fueled the Bitcoin rally...

A couple of rumors have also played a role in the rising price of Bitcoin.

One particularly powerful rumor is that online retail giant Amazon.com Inc. (Nasdaq: AMZN) is considering accepting Bitcoin as payment. It's unclear whether there's any meat to this rumor, but it definitely would give Bitcoin a positive jolt.

Equally compelling is speculation that China may once again allow Bitcoin trading, but with much heavier regulatory oversight. Since the Chinese crackdown on Bitcoin exchanges in early September was the main cause of the last Bitcoin price crash, a policy reversal would buoy the Bitcoin price.

On Tuesday, billionaire Mike Novogratz, a former manager of the Fortress Investment Group, said on CNBC that he was lured out of retirement by the sky-high prospects for Bitcoin and other cryptocurrencies. He's launching a $500 million fund targeted at cryptocurrency investing.

Don't Miss: The Best Cryptocurrencies to Invest in Today

Rumors have also surfaced that Goldman Sachs Group Inc. (NYSE: GS) is mulling the possibility of trading Bitcoin. In a tweet on Oct. 3, CEO Lloyd Blankfein admitted the bank is "still thinking about Bitcoin," although it had made "no conclusion" yet. Nevertheless, Blankfein's open-minded stance is a far cry from Dimon's attacks.

If more people on Wall Street begin to view Bitcoin as a store of value and an investable asset class, the resulting flood of money into Bitcoin will more than equal this year's price rise.

Here's how high the price of Bitcoin could go in the next few years...

Why a Bitcoin Price Prediction of $10,000 Is Just the Start