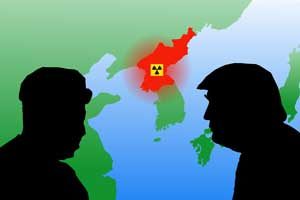 No, North Korea is focused solely on Uncle Sam - at least, according to the anonymous official's statement.

And the current administration's policies haven't borne any fruits either...

All this is to say, diplomatic efforts may be the only efforts the United States and its allies effectively have left to rely upon with the Hermit Dynasty, lest we fall back on all-out war...

Fortunately, there are many ways investors can prepare - especially with their finances.

Indeed, there are big gains to be captured coming out of all the mergers and acquisitions occurring among military contractors right now...

And around a month ago, United Technologies Corp. (NYSE: UTX) shelled out a hefty $23 billion to buy Rockwell Collins Inc. (NYSE: COL). That ranks as one of the biggest deals in aviation history - and both are ITA holdings.

A.J. You do not make sense. Your Idol de ignorante Obama went
your proposed rout and did not get any place and you are suggesting the same, how strange? I think you are a creature os
the swamp. North Corea has some one talking about how to go to the negotiating table and you criticize Mr. Trump. Please stick to your junk writing and let the President do his work. So you do
not look so ignorant.