Silver is having a strong October so far as the metal's price has been rising.

Also, the silver price has been playing "catch-up" with the gold price. The gold/silver ratio pulled back to 75 from its Sept. 25 peak near 77. Not to mention, we're nearing a seasonal decline for gold, which tends to put in a near-term bottom in the second half of October. After all, gold's average October performance over the last 10 years is a 0.7% decline.

I expect silver to follow along pretty closely, meaning it could pull back through the rest of the month. So look for gold's inexpensive cousin to reach an interim low sometime soon, with the main wild card being the U.S. dollar's rebound.

If the DXY continues higher, the price of silver could follow, but at a more muted pace. I don't think silver is ready for a big rally quite yet, but it shouldn't be too much longer. In fact, I still think prices could climb at least 20.4% before 2018.

The metal had a volatile day of trading on Wednesday even as the dollar kept moving lower. The silver price started the session lower at $17.14, trending between that level and $17.07 for most of the day as the DXY fell to 93.02. Silver eventually settled at $17.13 for a 0.5% loss on the day. 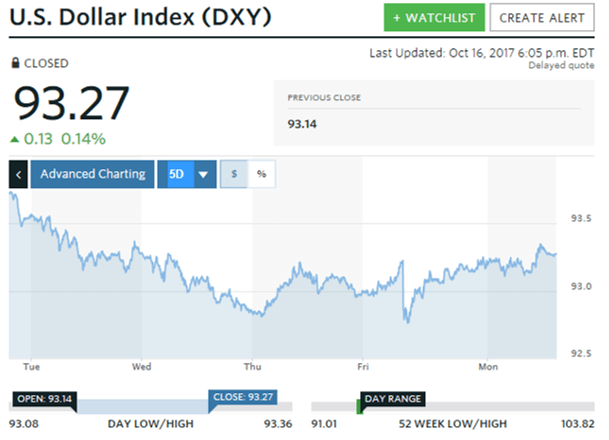 On Friday, Oct. 13, the silver price rallied to its highest close since Sept. 15 thanks to a volatile dollar. The DXY plunged toward an intraday low of 92.75 in response to a weaker-than-expected U.S. Consumer Price Index (CPI) report. The CPI increased just 0.1% last month – below analyst expectations of 0.2%.

With this week's decline, it's looking more like last week's rally was just a brief reaction to the dollar's short-term weakness. I think the dollar could still keep pushing higher in the interim, which could drag silver back down.

But looking at the long-term picture, it's possible that silver could rise with the dollar through the rest of the year. I predict the silver price could rise a minimum of 20.4% before the year ends.

Silver Prices Could Rally to This Bold Target Before 2018