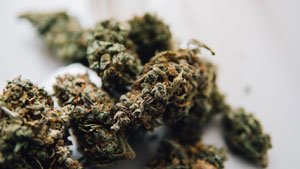 The state of Kentucky has a serious pension problem.

Kentucky's public pension system is among the worst funded in the United States. Currently, the system is about $40 billion in debt - a $2 billion increase from this time last year.

National credit rating agencies like Moody's have downgraded Kentucky's credit rating to "negative" because of the underfunding, which forces taxpayers to fork out more money for things like roads, schools, and other important public projects.

As a result, government workers are finding themselves trapped in state and city pension systems, forced to pay into broken pension funds from which they may never see benefits.

However, there could be a way to ease the Bluegrass State's woes....

Legal marijuana has been known to bring states enormous amounts of tax revenue, which is then used to fund previously destitute infrastructure and education programs.

In fact, the states that have passed marijuana legalization measures are growing dependent on the industry.

For example, Colorado put $16 million toward Affordable Housing Grants and Loans in 2016 from cannabis tax collections.

It's hard to imagine any state government wanting to part with all that much-needed cash.

"The discovered revenue from regulated legal cannabis markets can be a lifesaver to local law enforcement, substance abuse counseling, and other social services," said Leslie Bocskor of Electrum Partners, which provides advisory and consulting services specializing in the legal cannabis industry, to Forbes on April 11.

And now, marijuana legalization is being touted as a solution to Kentucky's pension crisis.

"There is an economic factor to this," said Daniel Seum, Jr., a cannabis activist from Kentucky. "When you free up that market, there will be taxes and those taxes are used for pensions."

Seum, Jr., is the son of Sen. Dan Seum (R-KY), who may formally file a bill, according to Lex 18, a local Kentucky news station.

Seum, Jr., estimates legal marijuana would generate about $110 million in tax revenue per year - a pretty fair estimate. The state of Colorado pulled in roughly $200 million in 2016.

"There are so many factors involved... you have health factors - these people need it. And you also have an economic factor, it's a win-win," said Seum, Jr.

Legal marijuana may be Kentucky's only chance at getting its pension deficit under control. The state has already exhausted common reforms to its system, like switching to a hybrid retirement plan and freezing cost-of-living adjustments, but to no avail.

"We've done pension reform and we still are where we are because none of it was designed to affect the unfunded liability," said Jason Bailey, executive director of the Kentucky Center for Economic Policy, to Kentucky.com on Sept. 1.

Protect Your Money with This "Safe" Pot Stock

When governments mismanage budgets and overspend, it's your money that's jeopardized.

If you live in Kentucky or in any of the dozens of other states struggling to keep up with pension obligations, you're likely trying to find a way to protect your hard-earned money.

The marijuana industry has proven to be extremely profitable for investors looking to protect and grow their money - especially now that many state governments are growing dependent on the industry to support themselves.

However, finding a truly "safe" pot stock is easier said than done. And while there's no such thing as a completely safe investment, we have uncovered one of the best marijuana stocks to own for risk-averse investors.

If you've owned it since 2013, you've already netted returns of 1,031%, and it has the potential to make triple-digit gains in the next 12 months.

And the company is about to release a groundbreaking new cannabis-based drug, Epidiolex.

Right now, Epidiolex is being tested for treating patients with childhood epilepsy and Dravet syndrome, a rare genetic epileptic dysfunction. It's currently in phase 3 trials, in which the efficacy and side effects are monitored before a drug is approved, for Dravet Syndrome and Lennox-Gastaut Syndrome.

But Money Morning Director of Technology and Venture Capital Research Michael Robinson believes Epidiolex will eventually have a much wider target audience.

"Children won't end up being Epidiolex's only focus. After all, chronic pain affects everyone, especially seniors - the drug industry's most important market," Michael said.

Right now, GW Pharma is looking to make its treatments available to 466,000 children in the United States who suffer from epilepsy and another 208,000 in key European markets.

"These patients currently consume tens of thousands of dollars in epilepsy medicine each year, drugs that barely make a dent in the number of daily seizures they must endure," Michael said.

However, Michael thinks GW Pharma could be in for another round of 1,000% gains - or higher.

"We're at the beginning of a sea change in how we treat chronic pain, shifting from opioid-based medications to cannabis-based ones. And with the first-mover advantage, we're in the perfect spot to profit," Michael said.

Up Next: Want to Invest in Weed but Don't Know Where to Start?

Get ready to turn a small stake into a fortune.

Marijuana investing is in its "frontier" stage right now, when the earliest investors can make the biggest windfalls. Marijuana stocks are seeing triple-digit gains of 224%... 378%... even an exceptional 751%. We've made it easy for you to learn how to get started yourself with a unique "pot investment" plan. Click here to learn more...

MEDICAL MARIJUANA "IS" THE SOLUTION. THERE IS NO REASON TO BE AFRAID OF PROPERLY HANDLED NATURAL, ORGANIC MMJ. SYNTHETIC HAS ALREADY BEEN LOWERED TO SCHEDULE TW0. AND SYNTHETIC (WHILE CHEAP) IS MORE DANGEROUS THAN NATURAL… REGARDING ABUSE AND DARK MARKET. CANADA HAS DONE A COMPLETE ROUND OF MEDICAL NATIONALLY AND FOUND "I.T." TO BE "SAFE," BENEFICIAL AND PROFITABLE. THEY WILL LEGALIZE REC./ COME 7-01. THE US… WITH LEGAL STATES BUT NO FED… LOOKS LIKE A TWO HEADED KNIGHT ARGUING WITH HIMSELF. CROP BURNINGS AND DRIVING RESTRICTIONS IN TRANSPORT MAKE THE SCENARIO A CHARADE IN THE US… WHERE THE POT-ENTIAL TRILLION DOLLAR INDUSTRY COULD C.H.I.P. AWAY @ THE 100 TRILLION PLUS IN UNFUNDED LIABILITIES THAT WILL BE UNWOUND IN THE BOND BALANCE SPREAD SHEET OF DECEMBER. THE US COULD LOOK LIKE ALABAMA COUNTRY BUMPKINS "I.F." THEY CANNOT EVEN AGREE TO FED EX MEDICAL AND FUND TRUMP CARE… WHILST THE ROYAL MOUNTIES HAVE A HOLIDAY ON RECREATIONAL.

Bevin needs to be vote out of office when he runs again because of him letting the state lose all that tax money going to the black market un taxed.

Don't hold your breath waiting for Kentucky to legalize Marijuana. This state is controlled by Republicans. Governor and both house and senate.