Bitcoin prices today climbed nearly 5% and reversed course from yesterday's downturn in part because of a new legislation in Australia.

Australia's new legislation will end a double tax on Bitcoin purchases starting in July 2018. Australians have been paying a "goods and services tax" (GST) on top of capital gains in recent years. 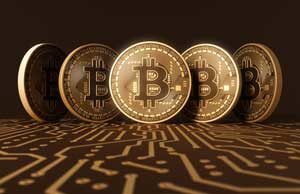 Below is a recap of the top cryptocurrency prices at 1:30 p.m. EDT

Top performers from the largest 50 cryptocurrencies by market capitalization included Metaverse ETP (up 29.74%), Monacoin (up 25.57%), Komodo (up 17.20%), Walton (up 13.10%), and Hshare (up 11.64%). Fans of the movie "Avatar" probably recognized today's top performing cryptocurrency. The "Unobtainium" coin, which rallied more than 450% Thursday, shares its name with the rare element found on the moon Pandora in the James Cameron film.

The Bitcoin market capitalization topped $94.31 billion after gaining nearly 5% in the last 24 hours.

Aside from the announcement out of Australia, a strong round of purchasing on Japanese exchanges helped send prices higher.

The nation's currency pairing represented 38% of all buying volume. The United States was second at 30%, followed by South Korea at 12%.

Ethereum Stuck Around $300 Once Again

The Ethereum price maintained its hold above the $300 level after a sharp downturn Wednesday.

Investors were bullish on yesterday's announcement that Russia's largest bank has joined the Enterprise Ethereum Alliance (EEA). The cryptocurrency has largely been stuck in a $290 to $310 range aside from Tuesday's pop.

Traders are still waiting to determine if the blockchain can overcome a few reported glitches in the Byzantium upgrade that took place last weekend.

Bitcoin Cash has found itself in highly volatile times. The spin-off from Bitcoin's hard fork on Aug. 1 hit a record high above $900 less than three weeks after the event. Since then, the BCH coin has plunged into the $200 range before recovering to its $320 to $330 range today.

But are investors undervaluing this coin right now?

According to Roger Ver and Calvin Ayre, two major proponents of BCH, investors are ignoring its value.

In fact, they will join other BCH advocates to begin a marketing campaign that argues "Bitcoin Cash is Bitcoin." Ver, who owns Bitcoin.com, has long supported hard forks and wants to rebrand BCH as Bitcoin.

The Ripple price slightly climbed today as buyers stepped in after two days of large downturns.

Markets had expected that the company behind the coin would make a significant announcement during its "Swell" conference in Toronto this week.

Nothing blew investors away, and the priced-in premium quickly evaporated.

U.S. Treasury Secretary Steven Mnuchin may have his focus on tax reform in the weeks ahead, but he is keenly aware that cryptocurrencies could be disruptive in the future.

On Monday, a new inspector general report and note advised Mnuchin to recognize the impact of "technological advances" on the government's money-printing operations.

The report listed "virtual" currencies aside other disruptive technologies like the Internet, smartphones, and stored-value cards.

Brilliant: Join our elite distribution list today to be among the first to receive real-time recommendations on Bitcoin.