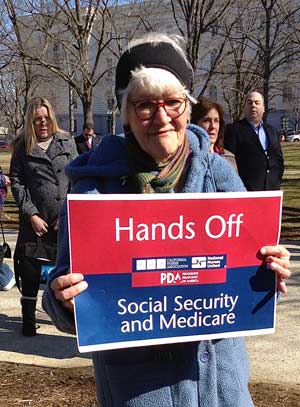 Congress is crippling your ability to receive Social Security benefits and acting like it's doing you a favor.

You see, U.S. legislators are embarking upon - and have been for quite some time - a dangerous cost-cutting trend that does everything to hinder the Social Security Administration's (SSA) operations and does nothing to keep it solvent.

In fact, Congress' next maneuver - its 2018 operating budget for the Social Security Administration - has no effect on the national deficit, hurts retirees and others who rely on Social Security, and will fail to keep the program solvent.

Fortunately, we'll show you how to rise above Congressional incompetence and build your own financial future.

But first, take a look at how Congress is slowly destroying Social Security...

The Social Security Admin's Demise: Death by a Thousand Cuts

Congress is making these "small" cuts to the SSA here and there in order to - allegedly - shore up funds to keep the trust fund and the agency's day-to-day operations solvent.

Social Security's $2.85 trillion trust fund is projected to run out by the year 2034, after all.

But legislators' most recent cuts do nothing to significantly extend the life of the fund...

In practice, the budget cuts have done the exact opposite.

These cuts drastically hampered the operations of the Social Security Administration - what The LA Times noted on June 10 as "the government's most efficient agency" with "superb customer services." The starved administration immediately became less accessible to the American people, creating problems for retirees nationwide.

"Nearly 10% of callers to Social Security's 800 number get busy signals, and for those who get through, the average time on hold is 15 minutes," reported The LA Times.

On top of that, according to the news outlet, "64 field offices out of a network that once numbered 1,352 and 533 of its 734 mobile offices have been shuttered since 2010, and reduced hours afflict those still open."

The reduced availability will also take a toll on Americans' faith in the program, perhaps rightly so.

According to Pulitzer Prize-winning journalist and LA Times reporter Michael Hiltzik, "the best way for any consumer-facing organization's reputation for quality to be destroyed is for its phones to go unanswered and its offices to be locked and dark during what normal people consider to be business hours."

In spite of these abysmal results, the House just gave the stamp of approval to a sweeping budget resolution that has been dubbed the party's most conservative fiscal statement in 20 years, according to Politico that same day.

Which means your unanswered calls to the SSA won't be answered anytime soon.

Stay One Step Ahead of Congress: Changes to Social Security directly affect your plans for retirement. And the changes for 2018 have already been announced. Don't let the politicians in Congress decide your future for you. Get free updates on Social Security by clicking the "Politics" Profit Alert, here.

Administrative Costs Are a Drop in the Social Security Bucket

First and foremost, a $600 million cut is a rounding error to a $2.85 trillion trust fund.

According to the LA Times, the administrative costs of the Social Security Administration make up less than 0.7% of its budget. For all of the strain, inconvenience, and frustration it has put on American retirees, the $600 million budget cut amounts to a miniscule 0.04% of the total annual budget for Social Security payouts.

Furthermore, the SSA's internal budget doesn't come from the Treasury; it comes from the Social Security payroll tax and other revenue garnered by the agency itself.

But given how insignificant the $600 million figure is, it's more likely that Congress is doing what Congress does best: making a show of "progress" or "efficiency" at the expense of the taxpayer.

Money Morning Chief Investment Strategist Keith Fitz-Gerald, who has 34 years' worth of market expertise and insight in the face of legislative mayhem, is furious with Congress' focus on appearance over real progress:

"I think it's a national embarrassment that the system's long-term stability has repeatedly broken down based on ideology rather than finance," he said today (Oct. 23).

"Unfortunately, I think division between conservatives and liberals on this issue is going to result in a last minute donnybrook yet again, which is ironic because fixing it sooner will cost far less than later."

If you wait on the politicians in Congress to make a sound, reasonable decision for the American people, you'll probably never stop waiting.

Instead, you can take your financial future in your own hands, earning more than enough to have the retirement of your dreams no matter what happens to Social Security.

To this end, Keith shows readers how to follow his "Six Unstoppable Trends," which are companies that are "backed by trillions of dollars Washington can't derail, the Fed can't muss up, and Wall Street can't hijack."

These are must-have companies. The stock listed below is up 381% since Keith first recommended it.

Invest in These 6 "Unstoppable Trends" for Your Future

Take a look at Raytheon Co. (NYSE: RTN), which is backed by Keith's Unstoppable Trend of "war, terrorism, and ugliness."

That may sound like a scary investing "trend" to follow, but rain or shine, the companies that fall under this umbrella are poised to make you money.

Raytheon, for instance, has billions in contracts with the U.S. government and governments worldwide. International customers make up half of Raytheon's portfolio. And because defense is a global necessity whether the stock market is up or down, Raytheon will always be in demand.

That could bring owners a 13% gain. This all makes Raytheon a great foundational play and a must-have in times of geopolitical uncertainty.

Don't wait - you can see all the details right here.

Congress in charge of killing Americans! They have not changed, because of Obama bringing all this law barkers in to this country. Congress wake up you will lose at the end

Cut the government not social secuity like the retirement that they get.

Take money from there pockets and see how they like it.God knows they make a lot more than we do