Silver prices have traded in a wide range in October, falling as low as $16.62 on Oct. 4 before reaching a monthly high of $17.41 on Oct. 13. The choppy price action has continued over the last week, with the metal down 2.1% over the last five trading sessions.

This volatility is frustrating the silver bulls, and I don't think it's over quite yet...

It's true that the gold/silver ratio is down to 75.5 today from its month-ago high near 77, meaning it currently takes 75.5 ounces of silver to buy one ounce of gold. But it's important to remember that's still a relative measure.

Silver stocks have also backed off from their recent high. The Global X Silver Miners ETF (NYSE Arca: SIL) - which tracks the performance of silver mining companies - is down 3.1% from its one-month high on Oct. 12. I'll be watching to see if silver stocks can put in another low, ideally higher than that one set a month ago.

But the biggest factor continues to be the U.S. dollar, which has weighed on the silver price this past week. The U.S. Dollar Index (DXY) - which pegs the greenback against the yen and euro, among other currencies - is up from 93.49 to 93.86 since last Tuesday.

The DXY's rally will likely continue in anticipation of a new U.S. Federal Reserve chair and December rate hike. According to the CME FedWatch Tool, there's a 96.7% chance the Fed will raise rates at the conclusion of the December FOMC meeting.

With all of these bearish factors in play, I expect the price of silver may see a bit more weakness in the first couple of weeks of November.

But I prefer to focus on the long-term picture, and my silver price forecast shows the metal rebounding before the start of 2018.

Before I get into my year-end price targets, let's take a closer look at the silver price's performance over the past week...

Here's how the DXY has trended since last Tuesday, Oct. 17... 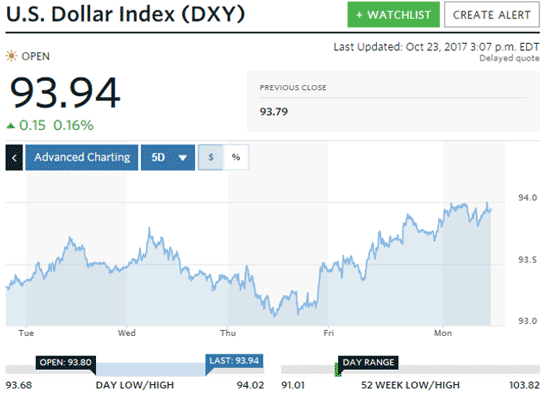 On Friday, Oct. 20, the dollar bounced back, with the DXY trading near 93.40 by the open. It kept pushing higher during the session, which lowered silver to $17.08 by the close. That marked a 1% loss on the day.

The silver price started this week with an uneventful session on Monday. As the DXY climbed to 93.84, silver was mostly resilient, neither falling nor rising in response. By the end of the day, prices settled at $17.08 for no change from the previous session.

As I already mentioned, the dollar will be the biggest silver price factor going forward in November and December. While the dollar could keep pushing higher in the short term, I think it will eventually run out of steam by late November. Once that happens, silver will be poised for a rebound before the end of the year.

Here's my silver price prediction for the last two months of 2017...

This Is How High the Silver Price Could Reach Before 2018