On Tuesday, altcoins pushed the global cryptocurrency markets higher thanks to concerns over Bitcoin hard forks, and Litecoin prices climbed over 4%.

Meanwhile, Bitcoin prices slumped nearly 4%, and it was the fourth-worst-performing cryptocurrency out of the top 100 by market capitalization. The altcoin rally was so significant that the value of just seven coins and tokens in the top 100 fell on the day. 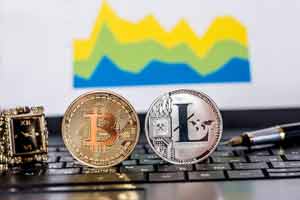 Today's rally in altcoins could be the beginning of a migration of capital from Bitcoin to alternatives ahead of new forks.

The Bitcoin market capitalization fell to $94.4 billion as traders took some profits off the table. The 3.87% decline comes a day after Saudi Prince Al-Waleed warned that Bitcoin prices are "going to implode."

Bitcoin Gold is also a reason for a drop in prices.

The Ethereum price bounced off the one-month low it hit Monday afternoon. The price ticked back above $300 as traders continue to monitor the results of Ethererum's recent Byzantium hard fork.

In addition, the Enterprise Ethereum Alliance released a statement in the wake of the successful first step of the Metropolis upgrade.

"In the mid-term, the success of the Byzantium hard fork and rapid adoption of the Ethereum network will allow Ether to rebound and recover in value," the EEA wrote.

The Ripple price jumped 10% on the day as traders came in and purchased the coin after a broader market sell-off.

The price has found support at around the $0.21 level. Prices fell sharply last week after the company behind Ripple failed to provide any breathtaking news at its Swell Conference.

The price of Ripple had rallied to more than $0.30 in anticipation of a major announcement at the conference.

North Korea has a long history of mining for resources and establishing tunnels around the country.

But cryptocurrencies have brought a new definition of the term "mining" to the reclusive nation...

Today, Quartz reported that North Korea may be using malware to secretly mine cryptocurrencies on your computer.

Malware cryptocurrency mining has reportedly become a major trend in the global hacking community. The report indicates that North Korean hackers are finding ways to use the computer power of strangers to mine Ethereum, Monero, and other cryptocurrencies.

Editor's Note: Get constant updates on Bitcoin, Ethereum, and other cryptocurrencies delivered directly to your inbox with our Profit Alerts service. Go here to sign up now...