Beijing just unveiled a new tactic to assert its sovereignty claims in the South China Sea.

Called the "lawfare" - or "legal warfare" - approach, China's new strategy to control the resource- and trade-rich region shifts away from the former (and universally rebuffed) "nine-dash line" (NDL) claim to a more concrete - though no less imperialistic - one. 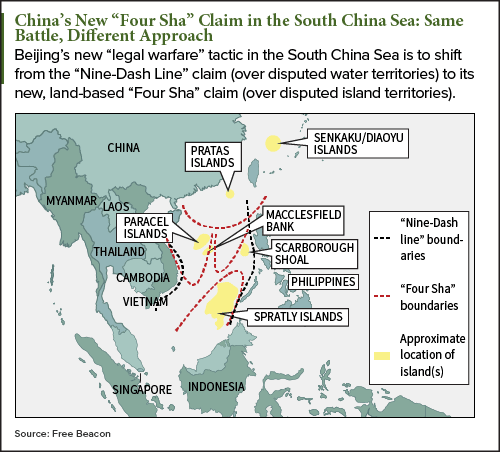 Specifically, the Red Dragon is now asserting regional sovereignty over the four contested island groups - colloquially called the "Four Shas" - housed within the South China Sea. This shift allows Beijing - at least, in its own mind - to claim ownership of the subterranean continental shelves to which these islands are attached.

And - voilà! - China has a new claim to the same contested area, only based on different terrain this time.

While some might perceive this maneuver as an insignificant move in a one-sided game of semantics, there are greater implications at stake. You see, it's actually advantageous for China to reframe the South China Sea dispute this way. According to Michael Pillsbury, senior fellow at the Hudson Institute and director of the Center for Chinese Strategy, in the Free Beacon on Sept. 21, the "U.S. government lacks both legal warfare and counter legal warfare capabilities" to fight back.

America's government? Not so much.

As a result, the United States hasn't reacted to China's claims at all.

And, according to Money Morning Executive Editor Bill Patalon, who's been watching developments in the South China Sea for years (and in the overall "Asian arms race" for over three decades), "staying mum" is the last thing Uncle Sam wants to be doing right now.

Bill says that Beijing is never looking for any "true give-and-take scenarios" - no matter the geopolitical stakes at play.

It never has and never will. While The Diplomat, a D.C.-based Asia-Pacific news site, argued on Tuesday (Oct. 24) that the United States "must ask China for discussions and briefings on the new claim," there's little reason to believe that Beijing would consider such an appeal - especially over its sovereignty claims in the South China Sea.

China has never considered coming to the "negotiating table" before. That's not how the country operates.

And Bill knows that.

"In the South China Sea," Bill says, "Beijing's idea of cooperation is 'you cave in and agree to let us do whatever we want.'"

And so far, the United States has been playing into that narrative. Although the Pentagon has been conducting regular "freedom of navigation" operations (FONOPs) in the contested region, Washington has not made a peep about China's new claims.

And every moment we drag our heels gives China the impression that its claims will go unchecked.

And the bolder China becomes, the more intense Washington's response will have to be to keep the South China Sea trade routes open and safe.

As tensions in the South China Sea mount, Bill is sure of one thing: Washington will respond.

And when - not if - America barks back, the world will find itself that much closer to actual military conflict.

After all, this current stalemate between the two world powers can't last forever. One day, China may feel the need to save face and lash out at a passing U.S. carrier group in an effort to assert global dominance.

Or perhaps the United States will have to use military force to protect one of its Pacific allies against China's aggression.

Whatever the future may hold, a war in the South China Sea always seems just one overdone bully tactic away.

And that ever-present threat is why Bill recommends investing in the companies that will quite literally shield America from enemy weapons in the years ahead. Indeed, his favorite pick in this space has already racked up 320% gains...

is the reason why the US suddenly discovered the issue with North Korea …
message they wanted to do to China on the subject,
(South China Sea Region),
but the USA and NATO etc have failed ….,

* 1) Firstly, the issue with North Korea proves that,
YES have firecrackers and other … very hard weapons that the US was ignoring …
so it is also obvious that the Atolmia proceed to the next step,
ie Bomber of North Korea,
as we have in the past with other states …

* 2) China has said that the US and NATO,
they have no power and
(in front of the Russian – Chinese axis),
will collapse like a paper tower … !!!