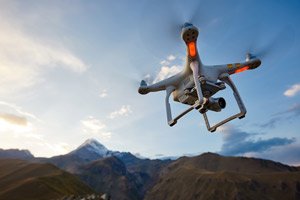 While flying cars and personal jetpacks have been part of Hollywood for decades, real drones, in many forms, are here today.

It may sound like science fiction, but the growth rate is staggering...

One defense stock he has been following closely for decades is at the forefront of this industry. This company even bought a startup focused on self-driving air taxis.

That's part of the reason why this defense stock is the single best way to play this emerging tech trend.

Drones are now being used in law enforcement, agriculture, and even in real estate sales.

Of course, the big topic of conversation is their use as delivery vehicles for products sold by companies from Amazon.com Inc. (Nasdaq: AMZN) to Domino's Pizza Inc. (Nasdaq: DPZ). Washington regulators have their hands full trying to keep up with the rapid growth and deployment of this new business model.

MarketsandMarkets says the drones sector is growing at roughly 20% a year. By 2022, the global sector will be worth roughly $21 billion.

Late last year, TechCrunch reported self-driving cars - which, even while still not commercially ready, seem to be all the rage - might be exciting, but not nearly as much as what comes afterward. The technology for flying cars already exists, but it was not implemented because the human factor for error seemed to be too great.

Enter autonomous vehicles - flying cars - and the future suddenly changes for the better.

Driverless flying vehicles actually have an easier path than driverless land cars. In the air, there are no pedestrians, potholes, or construction to avoid. Live pilots are almost unnecessary. Indeed, commercial planes spend most of their flight time on autopilot already.

More than a dozen startups are developing flying cars. They're backed by such luminaries as Alphabet Inc. (Nasdaq: GOOGL) co-founder Larry Page, the ride-hailing company Uber Technologies Inc., and even the Dubai Roads and Transport Authority.

Then there's Aurora Flight Sciences Corp. The Manassas, Va.-based firm developed autonomous systems for military and commercial aircraft to be flown remotely. The firm's software provides the technology that automates a range of flight functions. Again, the application is in a drone carrying people - military and commercial people, in this case.

While there are numerous visionaries working to make flying vehicles a reality, one defense company is positioned perfectly to profit as the industry grows.

Here's the best defense stock to buy now to play this growing market, along with the $6.1 trillion commercial aircraft market...