Gold prices are coming off their second straight weekly loss as the dollar continues to rally from its Sept. 8 bottom. The metal dropped 0.7% from Friday, Oct. 20, to Friday, Oct. 27.

But you can't say I didn't warn you. I've been telling you for some time that the U.S. dollar had likely bottomed at that two-and-a-half-year low on Sept. 8 after an eight-month sell-off that began early this year.

The index is up an impressive 3.7% over nearly two months, and I think it will likely run even higher. Its momentum has been the biggest obstacle keeping gold from regaining - and holding - the $1,300 level.

We also have Trump's new tax cuts, which could make their way through Congress soon. The Dow Jones is up 2.2% in the last two weeks in anticipation of lower taxes, sucking away investor interest from precious metals and dragging prices lower.

In the near term, gold price sentiment could remain negative. But the metal could surprisingly push higher when the least number of investors and traders expect it. I think gold will start to rebound once the DXY hits the 96 to 97 range, which is where the dollar could top out.

Today, I'm going to show you why I'm still bullish on gold through the rest of the year. But first, let's take a closer look at the yellow metal's performance last week...

This chart shows how the DXY trended last week... 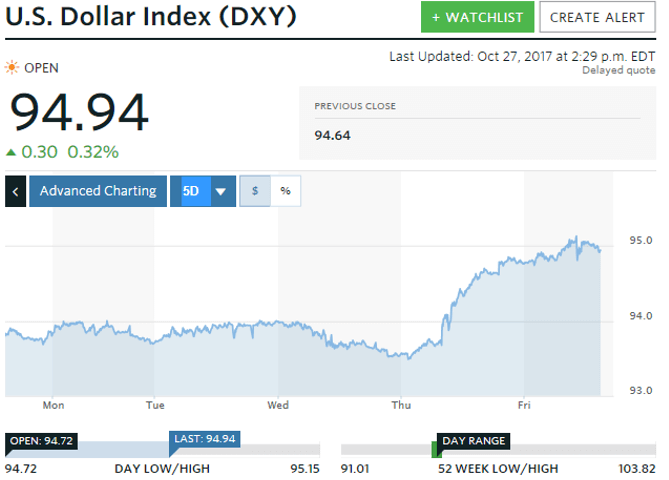 But the dollar rebounded strongly on Thursday, and for good reason. The European Central Bank (ECB) not only left interest rates unchanged, but it also announced plans to scale back its bond-buying program.

The news tanked the euro - the currency most heavily weighted in the DXY - and lit a fire under the index, which touched a low of 93.5 in the morning before surging to 94.79 that evening. This sent gold spiraling downward, ending the day at $1,270 for a 0.7% loss.

The story surrounding gold prices since early September has been all about the dollar. That hasn't changed for a while, nor do I expect it to. Since gold is priced in the dollar, any gains in the currency make gold more expensive to people using other currencies. This lowers demand and therefore drags the price of gold lower.

But a recent report shows that the dollar's momentum could continue in the short term but not the long term. I see it losing steam in the next few weeks or so, eventually giving way to a strong rebound for gold.

Here's my bullish gold price forecast through the last two months of 2017...