New Jersey may be the ninth state to approve recreational marijuana.

That is, if Democratic candidate Phil Murphy wins next week's gubernatorial election. 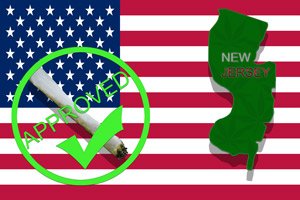 Murphy has long been an advocate for legalizing cannabis. He believes that legalizing and regulating cannabis while decriminalizing personal possession will lower the sky-high arrest and conviction rates for African Americans in New Jersey.

"The fact of the matter is that New Jersey has the widest white/non-white gap of persons incarcerated in America... the biggest contributing factor is our low-end drug crimes," argued Murphy in his final debate on Oct. 18.

To combat this issue, he's pledged to sign a bill within his first 100 days in office legalizing marijuana for recreational use.

"[I want to] legalize marijuana so police can focus resources on violent crime," said Murphy on his website.

But that's not the only reason Murphy wants recreational marijuana in his state...

Murphy is well aware of the economic benefits marijuana could bring to New Jersey.

Nationwide, cannabis is expected to generate nearly $21 billion in sales by 2021. In the state of California alone, sales could reach as much as $15 billion by 2021.

Just last year, the organization New Jersey United for Marijuana Reform released a report that estimated the legal marijuana market is worth $1.3 billion in New Jersey and could generate over $300 million in state tax revenue.

And New Jersey - which is looking at a $1 billion budget shortfall - could use the help.

Marijuana tax revenue in other states is being used to fund previously destitute projects, like housing grants and youth programs - in addition to law enforcement training, which Murphy desperately wants.

So a win for Murphy would also be a win for the New Jersey residents who are eager to get their previously destitute schools, roads, and other infrastructure projects up and running.

It's no wonder the odds are in his favor...

As of today, Murphy has a lead in the race, with polls giving him anywhere from a 13% to 25% advantage, according to Entrepreneur.

Of course, some may argue that majority support isn't a one-way ticket for total marijuana legalization. They might point to Pikesville, Md., where residents are trying to keep a dispensary out of their community despite the state's 61% support for legalization.

"This is what I like to call NIMBYism," said Money Morning Director of Technology & Venture Capital Research Michael Robinson on Nov. 1. "It stands for 'not in my backyard!'"

"NIMBYism happens when some bold, new venture with incredible economic potential - nuclear or wind power facilities, a new airport, or, in this latest case, legal weed - is just about set to hang out its shingle (and make a ton of money), when from the neighbors we hear...'not in my backyard!'"

Michael is our legal pot industry expert here at Money Morning - and for good reason.

As a 34-year veteran of the financial industry, he's long been enthusiastic about the widespread effects marijuana legalization can have on the economy - and your wallet.

"The momentum behind this growth is almost unprecedented," said Michael. "In fact, I've only ever seen it once before: in Silicon Valley, in the 1980s. That momentum and profit potential is part of what drew me to the cannabis market."

And he's familiar with what happens when marijuana legalization is passed in a state where not everyone is aboard.

"In my experience with the 'NIMBY' phenomenon years ago, as medical marijuana was first hitting the markets in the Bay Area, angry neighbors grab headlines, column inches, and local news airtime, but the truth is these highly localized protests are really more of a speed bump," said Michael.

"The point is, the 'NIMBY effect' can temporarily slow, but never stop, the $7.2 billion legal marijuana industry that's growing by 17% a year," he added.

No matter how hard some may fight it, it's simply too late to stop marijuana legalization.

So for now - regardless of what happens in the Garden State - don't let the "NIMBY" effect deter you from making your move and building a top-notch legal cannabis portfolio. If you're not in now, you're at a real risk of getting left behind.

Get On the Road to Marijuana Wealth Today

But the gains aren't over yet - not even close.

Now he's focused on a new, earth-shattering government announcement that could completely change the legalization of marijuana - forever. In fact, thanks to this historic legislation, tiny pot stocks trading for under $5 are getting set to double, triple, or quadruple.

In an exclusive interview with Money Morning, Michael shares all the good news - including details on five tiny weed stocks that could potentially turn a small stake into $100,000. Click here to continue.