Harvey, Irma, Jose, Katia, Maria... the list is long, and could still grow.

These are the names of some of the strongest hurricanes ever recorded in the Atlantic Ocean... and they're all from this season.

September may have been the worst month for hurricanes... ever.

The devastation has been almost beyond comprehension. Mass evacuations, flooding, and ultra-high winds caused power, water, food, and gasoline shortages that have affected millions of people.

The destruction to homes, commercial buildings, roads, and bridges has been catastrophic, and the damage to cars, trucks, and boats is beyond repair.

As you can imagine, the reconstruction effort is going to be of goliath-sized proportions, while the companies in charge of this undertaking are set up for immense profits.

Despite a host of forerunners in the preceding months, this year's hurricane season really got going in a truly remarkable way on August 17th, with Hurricane Harvey 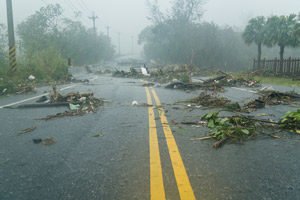 In its wake, Harvey left 57 dead and dumped about 27 trillion gallons of rain on Texas and Louisiana in just six days.

Texas Gov. Greg Abbott warned that around $150 - $180 billion may be needed to help rebuild his state. If that's the case, and it's looking very likely, Harvey will handily beat the previous record set by Katrina, in New Orleans, at $110 billion.