Bitcoin prices experienced a small sell-off this morning, and we learned that UBS' Global Chief Economist Paul Donovan is not a fan of cryptocurrencies. 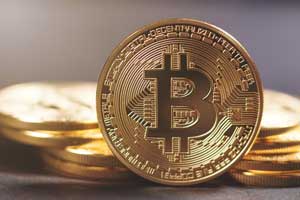 Last week, Donavan compared the Bitcoin price surge to the "Tulip Mania" of 1630s, when tulip bulbs reportedly sold for more than 10 times the annual income of a skilled craftsworker.

Despite the negative sentiment, other traders are instead paying close attention to the recent price target hike by StandPoint Research analyst Ronnie Moas.

Last Friday, Moas and I spoke by phone from New York. The analyst raised his 2018 price target on what he called the biggest "supply/demand imbalance" of his lifetime.

Money Morning will publish a full transcript of this interview shortly.

Below is a recap of the top cryptocurrency prices at 10:30 a.m. EST

Despite the cryptocurrency's small decline, investors have their eyes on $8,000 next as a price target.

Must Read: When Is the Winklevoss Bitcoin ETF IPO?

Bitcoin prices pulled back like a wave after reaching $7,600 on Sunday. Today's downturn shifted capital back into the altcoin market.

The Ethereum price topped $300, but it has largely been left in the dust by Bitcoin's incredible surge since the panic fueled by China's ban on initial coin offerings.

While everyone has been focusing on the stagnation in Ethereum prices, the altcoin Ethereum Classic is starting to break out.

The Ethereum Classic coin pushed into the top 10 cryptocurrencies by market capitalization overnight.

Ethereum Classic prices are up 10.95% so far today.

Bitcoin Cash added another 11% on the day as investors continue to pile into the sibling of BTC.

Many BCH traders were concerned that new creations from Bitcoin forks would divert capital.

However, a community has failed to materialize around Bitcoin Gold. Meanwhile, Bitcoin Cash is witnessing an uptick in support from exchanges around the globe.

A top research analyst at the People's Bank of China is pushing the Chinese government to establish its own cryptocurrency soon. The state-backed coin would be part of a broader effort to cement China's power in the global financial system, dramatically reduce transaction costs, and bolster rural financial services.

The South China Morning Post reported that Yao Qian, who is the chief analyst for the central bank's cryptocurrency research, has called a digital legal tender issued by the central bank the "jewel in the crown" of the financial technology industry.