Over the weekend, President Trump made two more pitches for the Saudi Aramco IPO to be held in New York. But a secret meeting and a political purge in Saudi Arabia could actually decide where the Saudi oil company lists… 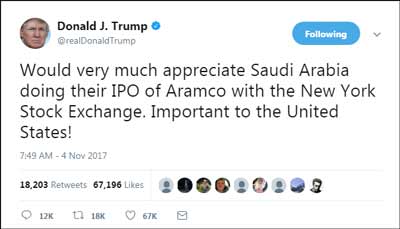 And on Sunday, he told reporters aboard Air Force One that he'd called the Saudi king to make his case for holding the IPO in New York.

"I just spoke to the king a little while ago, and they will consider it," the president said. "It's very important. We want to have all the big listings."

The president said he told King Salman "to strongly consider the New York Stock Exchange or Nasdaq or frankly anywhere else located in this country."

While President Trump's push was the leading Aramco IPO news this week, something much bigger is going on in Saudi Arabia right now.

How Saudi Politics Are Shaping the Aramco IPO

We've told you about the Aramco IPO mastermind – the 32-year-old Mohammed bin Salman – and his ambitious plans to transform the Saudi economy.

As the next in line to the throne, he's been taking on more and more power in the Saudi government. His powers now include control over the Saudi economy, including Aramco, and the country's foreign policy.

It's clear the mastermind behind the Aramco IPO is consolidating power in Saudi Arabia.

Now, he's behind the arrest of 11 Saudi princes and four government ministers during a surprise raid over the weekend. That list includes the last king's son – who is also the leader of the Saudi National Guard and rival to bin Salman – and the country's richest investor.

And this isn't the first major arrest bin Salman has been behind. He jumped ahead of the line of succession by deposing his uncle, who is still being held under house arrest in his palace.

"MBS appears to be deliberately dismantling the traditional governance system in Saudi Arabia," wrote David Ignatius in The Washington Post on Monday (Nov. 6, 2017).

The New Yorker describes the targets of the surprise arrests as "royal brethren who controlled money, the media, or the military." Major Saudi business leaders and investors were taken down in the sweeping crackdown. These include billionaires like the founders of Middle East Broadcasting Corp. and the head of Kingdom Holding Co.

It's clear the mastermind behind the Aramco IPO is consolidating power in Saudi Arabia. That gives him even more control over the country's economy, including where Saudi Arabia will list shares of Aramco.

What Jared Kushner Was Really Doing in Saudi Arabia

Jared Kushner, officially a senior advisor to the president, flew to Saudi Arabia two weeks ago on Wednesday, Oct. 27. His trip was kept a secret, and he even flew on a commercial airline instead of a government plane to keep the trip under wraps.

But what was Kushner doing in Saudi Arabia just as Mohammed bin Salman's purge was about to start?

Fortune 500 Firms Rush Toward This Breakthrough: Physicists have known about an unlimited source of free fuel for over 100 years. And the cost of this fuel is zero. It's free. Click here to learn more…

We don't know who Kushner met with or why he went there, and the White House only confirmed it happened when he returned on Sunday, Oct. 29. The official confirmation merely confirmed the trip and mentioned negotiations between Israel and Palestine.

But the events over the weekend, combined with President Trump's response, show us that Kushner might be brokering a deal to land Aramco in the United States…

You see, while Mohammed bin Salman wants to sell Aramco shares to the public, which stock exchange gets to list the stock has been one of the top questions about the IPO. Since Aramco is valued as high as $2 trillion, whichever country wins the listing will see an economic boost. And the London Stock Exchange may have been in the lead for the IPO – until now.

As Politico described in its Oct. 29 summary of the trip, Kushner and bin Salman have "cultivated a relationship." They are both young – still in their 30s – and hold outsized roles in their respective governments.

And just a week after Kushner's secret trip, Mohammed bin Salman waged a severe crackdown on elites in Saudi Arabia, leading to unprecedented and widespread arrests. The Washington Post described this as a "power play" for bin Salman.

Now, President Trump is publicly supporting bin Salman's efforts as the Western media has picked up the story, and just days after he publicly lobbied for the Aramco IPO. 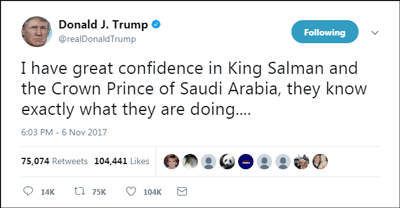 This could all be coincidence. But the timeline shows that Jared Kushner, who knows bin Salman, took a secret trip to Saudi Arabia just before bin Salman began his purge. And after the purge, the President Trump is publicly backing bin Salman in a show of international solidarity.

President Trump famously styles himself as a dealmaker, so what is the United States receiving in return for his support of the Saudi crackdown? It could be that the Aramco IPO taking place in New York is the other half of the deal…

We'll keep Money Morning readers completely up to date on the developments surrounding the Saudi Aramco IPO. You can be the first to receive our exclusive insights by signing up for our free distribution list, right here…

But for investors who want to profit from the Aramco IPO, Mohammed bin Salman's efforts to restructure the Saudi economy are going to lead to $100 billion pouring into this new fuel source…