Silver prices are finally on the rise again, after their price weakness appears to have finally ended over the last trading week. Since my Oct. 31 update, when silver reached a bottom of $16.69, the metal has rebounded 2.6%, to $17.12 today (Tuesday, Nov. 7).

The biggest catalyst this week is uncertainty surrounding Saudi Arabia and the kingdom's arrest of 11 high-profile princes and four ministers. Prince Mohammed bin Salman - the son of King Salman - is widely seen as the power behind his father's throne. While the government cited efforts to purge corruption as the reason for the arrests, they appear to be Prince Mohammed's move to consolidate his power.

The news not only pushed oil prices up nearly 3% yesterday (Monday, Nov. 6), but it also gave the silver price a 2.4% boost. That gain outperformed gold's 1% gain and demonstrated the relative "undervaluation" of silver compared to gold right now.

And as much as gold stocks remain an incredibly undervalued sector, silver stocks are arguably even cheaper relative to silver. To me, that indicates an incredible buying opportunity is forming for silver right now.

While we may see day-to-day volatility, I think the price of silver is set for an overall rally through the end of the year. In fact, I predict it could gain as much as 19.8% before the end of December.

Before I dive deeper into my forecast, here's a recap of the metal's rebound in the last week...

The price of silver pulled back a bit on Thursday as investors focused their attention on the stock market. The Dow Jones climbed 0.3%, which dragged silver 0.2% lower on the day to settle at $17.14. Silver's losses came amid a small decline in the DXY, dropping from 94.81 to 94.69 over the course of the session.

This chart shows the DXY's performance over the last week... 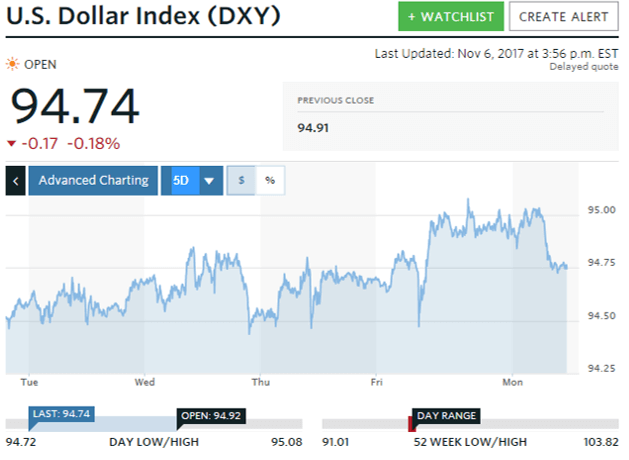 The silver price kicked off the new week with a rally yesterday (Monday, Nov. 6) as the DXY pulled back from the 95 level to close at 94.75. This - combined with uncertainty surrounding the arrests in Saudi Arabia - urged investors to buy safe-haven metals like silver. By the end of the session, silver prices were up 1% to $17.24 - the highest close since Oct. 19.

But the price of silver today (Tuesday, Nov. 7) is retreating from yesterday's three-week high. It's currently down 0.7% and trading at $17.11.

Silver's Oct. 31 settlement at $16.69 was the lowest since Oct. 5, and it looks like it could be a bottom considering last week's rebound. I think silver prices could keep pushing higher from here, even if they continue to see day-to-day swings.

My Silver Price Forecast for the Rest of the Year