The Paradise Papers leak this past Sunday wasn't shocking.

If anything, the varied revelations about what celebrities and corporations use offshore tax shelters only further justify the general public's long-standing suspicion that the rich and powerful cheat on their taxes.

It's also safe to assume that this latest detailed batch of leaks won't be enough to warrant actual change from the governing powers that be.

What Are the "Paradise Papers"?

The "Paradise Papers" are leaked records taken from Bermuda law firm Appleby, which specializes in hooking up the wealthy with tax shelters. Originally published on Sunday by German newspaper Süddeutsche Zeitung, the records revealed a web of investments and schemes that make it easier to hoard cash without paying taxes.

In short, nothing will make the 1% or America's wealthiest institutions pay their fair share.

It's Not Illegal to Use Tax Havens

In the United States, some citizens and companies use the offshore world for legitimate purposes - such as when companies want to smooth international trade transactions. And being identified as an individual or company holding such offshore accounts is not, in and of itself, an indication of wrongdoing.

There are a lot of ominous, implicating facts being highlighted in the mainstream media right now about America's richest tech corporation.

The Paradise Papers revealed that Apple currently holds $236 billion offshore, according to The New York Times on Nov. 5. That sum is just a small portion of the larger foreign profits stash - an estimated $2.6 trillion total - hoarded abroad by U.S. corporations in all.

Apple pays taxes on just a small fraction of that $236 billion sum, according to calculations by NYT. Specifically, the company "reports that nearly 70% of its worldwide profits are earned offshore," the outlet reported. This means that Apple Inc. only pays U.S. tax rates on 30% of its overall profits.

And it uses creative tax machinations to get this done. In fact, it was Appleby's job to do all that numbers crunching and money shifting - none of which broke any laws.

This is because, under the current tax code, foreign profits that aren't "repatriated" into America can legally avoid taxation this way. That is to say, corporate foreign profits can be stored in offshore accounts indefinitely, without being subject to U.S. corporate tax rates.

And, to an extent, doing so - especially for multibillion-dollar companies like Apple Inc. - makes sense. At 35%, the current U.S. corporate tax rate is the highest in the world. Without the use of a tax haven, Apple would have to pay $1.7 billion in taxes per year.

Not to mention that repatriating its $236 billion in overseas cash holdings would cost Apple $82.6 billion.

We can hope, of course, that the tax plan currently being fought over in Congress will change all that and make offshore accounts less desirable.

But that's not necessarily true either...

For Some, the New Tax Plan Will Make Tax Havens More Desirable

You see, while the new tax plan does drop the U.S. corporate tax rate from 35% down to 20%, in hopes of enticing big companies to repatriate their foreign profits back onto U.S. soil, it also provides a stipulation that would make it easier for wealthy individuals to use tax havens at the same time. 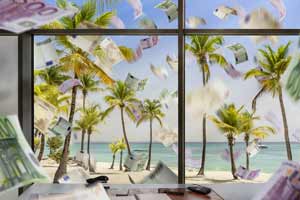 That's because, under the plan, wealthy individuals who earn more than $1 million a year would have the opportunity to reclassify themselves as "corporations." At the same time, the new tax proposal calls for a shift to a "territorial tax system," which would not require corporations registered in the United States to pay taxes on all overseas profits, but only in the countries where their money is stored.

This change incentivizes corporations - some of which would actually just be Americans who earn $1 million or more calling themselves corporations - to maneuver their profits into low-tax countries via shell companies (fake companies set up for tax evasion purposes).

That may sound like a complicated plan for tax evasion, but it's actually quite common.

There's yet one more reason why nothing will ultimately come of the "Paradise Papers" leak, insofar as punitive legal measures are concerned...

We've seen all of this before.

The Paradise Papers Are Nothing New

Much like they did in the 2013 "Offshore Leaks" from two offshore incorporators in Singapore and the British Virgin Islands. These leaks in particular featured 4,000 U.S. individuals, at least 30 of whom stood accused in lawsuits of fraud, money laundering, or other serious financial misconduct (now that's illegal), according to The Washington Post on April 6, 2013.

In May 2014, the U.S. Department of Justice revealed it was prepared to bring criminal charges against banks suspected of involvement in tax evasion. And it did nab Credit Suisse at the time for helping individuals disguise their own identities (a totally different crime than tax evasion).

No charges against big businesses or rich individuals resulted from this leak, however.

And no substantive tax code changes were made.

U.S. citizens' finances were likewise brought to light in the 2015 "Swiss Leaks" from a private Swiss bank owned by the British financial institution HSBC.

This particular trove revealed several individual, wealthy multimillionaires and billionaires going to great lengths to avoid paying U.S. taxes - with HSBC's help. In fact, the bank even went so far with one client, a U.S. surgeon named Andrew Silva, in Geneva, that it handed over "bricks" of $100,000 for him to mail stateside in $10,000 increments to avoid paying a customs fee, reported The International Consortium of Investigative Journalists (ICIJ), a D.C-based nonprofit news organization, on April 7, 2013.

That year, the IRS released a statement about the prevalence of wealthy U.S. citizens and businesses using tax havens, claiming that the agency "remains committed to our priority efforts to stop offshore tax evasion wherever it occurs." It also mentioned that it had collected more than $7 billion from a program, introduced in 2009, that allows U.S. taxpayers to voluntarily disclose previously undeclared offshore accounts.

The IRS, however, declined during its same 2015 statement to say how many U.S. taxpayers have been investigated as a result of "Swiss Leaks." It did so citing taxpayer privacy.

To date, no major arrests have been made after this leak, either. HSBC later paid out a mere 40 million Swiss francs for money laundering and fraudulent financial practices, after which it was sent off with a warning from the Geneva authorities for "organizational deficiencies," reported The Guardian on June 4, 2015.

But there were no substantive tax code changes abroad or in the United States.

There seems to be no stopping America's elite from finding ways to keep even more of their enormous sums for themselves.

So, instead, focus your energies on how to build your own wealth. And in that endeavor, we can help. Check it out...

Get On the Path to Greater Wealth

Since the laws are made by (RICH LIVING ) politicians , ;lets abolish politicans !