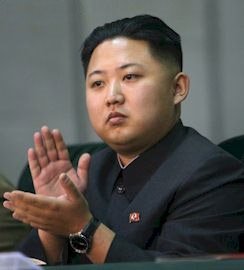 And we know exactly why.

After all, Kim doesn't want to die some grisly death at the hands of his enemy (America) at the young age of 33. And that's exactly what surrendering his nuclear stockpile would do.

Plus, he knows that relinquishing nukes now would result in the untimely deaths of North Korean civilians, as well.

"If you're the North Koreans, you would have to be freaking insane to give up your nuclear weapons," Lewis told CNBC this morning (Nov. 8). "There is exactly zero evidence that the United States is going to keep its word. And it hurts me to say that; it's upsetting, because I desperately want diplomacy to work."

Lewis has a point.

One quick glance back into recent world history shows that the United States isn't likely to guarantee Kim's safety once he gives up his nukes once and for all.

Especially not after the gruesome deaths of two enemy dictators not all that long ago – and the thousands of civilians killed by Western forces to boot.

No – America's history will keep global tensions at a maximum for the foreseeable future. Here's how we know…

For North Korea's Leader, Iraq Is a Cautionary Tale

Since the 80s, Iraq was widely assumed to have been producing and extensively running biological, chemical, and nuclear weapons programs. 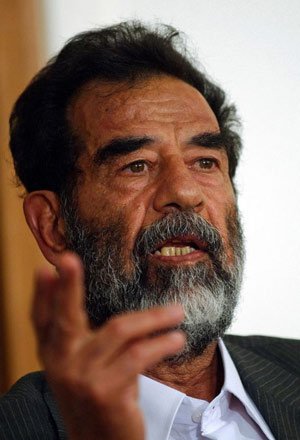 On March 19, 2003, under former U.S. President George W. Bush's orders and on the auspices that weapons of mass destruction (WMDs) were being built, the U.S. military and NATO allies invaded Iraq. As this incursion began, President Bush made the following statement to the nation…

"My fellow citizens, at this hour, American and coalition forces are in the early stages of military operations to disarm Iraq, to free its people and to defend the world from grave danger."

Bush likewise gave Hussein an ultimatum in his speech: that he and his sons had 48 hours to leave Iraq.

Drones Are Going to Be Big – "$127-Billion-In-New-Wealth-For-Early-Investors Big." See The Seven Reasons This Drone Company's Stock Is Set to Explode.

Three years after his seizure, on Dec. 30, 2006, the once-powerful Iraqi dictator was hanged in Baghdad.

The Iraq Body Count project (IBC), a web-based effort to record civilian deaths resulting from the U.S.-led 2003 invasion of Iraq, reported on July 19, 2005, that 7,299 civilians were documented to have been killed that year, primarily by American air and ground forces.

Why North Korea Is Afraid to Cooperate with the West

To Kim Jong Un, the fate of Libyan dictator Muammar Gaddafi shows the dangers of cooperating with Western forces.

As dictator, Gaddafi ran a socialist regime that quickly developed a reputation as a rogue nation – much like the one North Korea has now. His regime consistently committed human rights abuses, funded terrorist groups, and proliferated weapons of mass destruction.

Yet, in a surprise move in 2003 – on the heels of the Iraq incursion – Gaddafi conceded to Western demands that he give up his quest for nukes.

However, in-fighting between Libyan rebel factions and pro-Gaddafi forces persisted for years in the wake of the deal.

As a result, the UN Security Council gave the country an ultimatum on March 17, 2011.

"Demanding an immediate ceasefire in Libya, including an end to the current attacks against civilians, which it said might constitute 'crimes against humanity,' the Security Council this evening imposed a ban on all flights in the country's airspace – a no-fly zone – and tightened sanctions on the Qadhafi regime and its supporters." 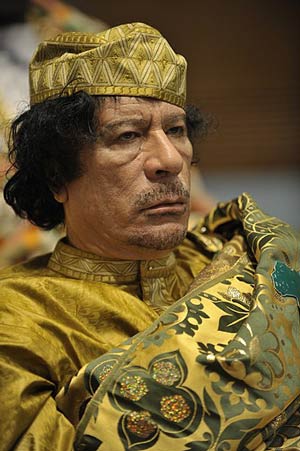 Roughly six months after that, on Oct. 20, 2011, Gaddafi was deposed, captured by Western forces, and subsequently killed. His manner of death remains up for debate to this day.

Estimates of civilian deaths during that six-month span of time range from 1,914 to 3,466 people killed, according to Uppsala University's Conflict Data Program.

Alert: Defense Stocks Are Skyrocketing – See How You Could Profit from This Company Before It's Too Late

In the face of these dictator predecessors, their resulting deaths, and the mass casualties caused by Western intervention, it's no wonder that Kim Jong Un wants to keep hold of his nuclear weapon stockpile.

And since he'll be keeping his weapons cache at hand, global instability will, unfortunately, remain constant.

The time has never been better for you to prepare for the likelihood of a U.S. war – or yes, another NATO surprise intervention – too.

How to Protect Yourself from Tragedy – and Profit, Too

Personal safety is most important when preparing for the nightmare scenario of war. Indeed, Money Morning Executive Editor Bill Patalon showed readers how to prepare for a tragedy two months ago.

In the meantime, however, you shouldn't be stuffing all of your money in your mattress. Dire global tensions are an opportunity, not an obstacle.

One such wealth-growing opportunity is Boeing Co. (NYSE: BA).

Boeing has several contracts with the U.S. military; for example, it is largely responsible for the THAAD missile system set up in South Korea that, just today, completed its first intercontinental ballistic missile (ICBM) interceptor well ahead of schedule.

The demand for Boeing's work is shown in its stock price.

An uptick in global instability will mean an increase in revenue for Boeing – and a boon for its investors. But Boeing's value is well known. Although it's the perfect foundational play to help your money grow amid geopolitical turmoil, it's unlikely to see explosive, life-changing growth in the near future.

Fortunately, Bill has spotted just such an opportunity that he's sharing with select readers…

Before Bill moved into the investment-research business in December 2005, he spent 22 years as a journalist, most of it covering financial news as a reporter, columnist, and editor for outlets such as Gannett Co. Inc. and The Baltimore Sun.

Along the way, he earned the esteem of heavyweights like Anthony Gallea, senior portfolio management director at Morgan Stanley, who collaborated on Patalon's groundbreaking 1999 book "Contrarian Investing."

Bill's ideas so impressed Jim Rogers that the hedge fund genius eagerly wrote a glowing, six-page introduction to the book.

A winner of approximately two dozen journalism awards – including top honors from the Associated Press and the prestigious Society of American Business Editors and Writers (SABEW) – Patalon has had his work featured in Kiplinger's personal finance magazine, USA Today, and The South China Morning Post, among other publications.

Before taking over Money Morning, he served as the editor of The Rebound Report, an investment newsletter focused on turnaround stocks.

Patalon has a Bachelor's in Print Journalism from Penn State University and an MBA in finance from the Rochester Institute of Technology.

Yes, he's uncovered a lot of investment stories. And he's even been nominated for two Pulitzer Prizes.

It started in early 2016, when millionaires, billionaires, hedge funds, institutional investors – all the bigwig players on Wall Street – began searching for a safe place for their money… one that would keep their billions protected from the volatile market extremes we saw earlier that year… but also a place where they could still make decent returns.

What they found was a global economic mess, beginning here at home.

As if that wasn't bad enough, you have the scourge of negative interest rates popping up all over the world, which means you have to pay the bank to hold your money – not the other way around.

They were forced to, as global currencies were being crushed across the board and negative interest rates guaranteed they would lose money.

Turns out that piling into gold wasn't too bad a choice, actually, as indexes like GLD zoomed 16% last year- beating all the major indexes combined.

The price of the metal itself had skyrocketed as much as 30% since December 2015.

The resulting anomaly is bound to mint another generation of millionaires…

Because so many investors poured so much money into gold – and gold spiked so high so fast – it opened the door for this ultra-rare but powerful anomaly to occur, where another precious metal – one that, like gold, is often considered a safe-haven "currency" – got "temporarily left behind."

We're not talking about silver… in fact, silver also saw a big spike after Brexit, when investors plowed into precious metals for protection from falling currencies.

Rather, we're talking about another precious metal that is exceedingly rare – 30 times rarer than gold – occurring at a concentration of only .005 parts per million in the earth's crust.

In fact, it's so rare that all of this metal that's been produced in the entire history of man would only cover your ankles in one Olympic-size swimming pool!

And unlike gold, this precious metal is extremely important for a host of other things besides jewelry and stores of wealth.

That's because it contains a myriad of chemical properties – properties that can help turn auto emissions into carbon dioxide and water… extract gasoline from crude oil… enhance magnetic properties… convert ammonia to nitric acid… and that can be found in anti-cancer drugs and infrared detectors.

As a result, this rare and precious metal can be found in everything from catalytic converters, to pacemakers, to chemotherapy drugs and other life-saving medicines, to fuel cells, glass, and more.

Which is why industrial demand consumes 50% of annual production, as nearly everything we use or manufacture either contains this metal or requires this metal for its own production.

Make no mistake: This anomaly has the potential to be HUGE… and the time to start positioning your portfolio into platinum is right now.

To understand why the gold anomaly has the power to make you so much money by investing in platinum, you have to understand the relationship this rare precious metal has with gold.

They have a very special relationship that insiders call the "gold/platinum ratio." The anomaly Bill has identified occurs right smack in the middle of this ratio.

Because platinum is about 30 times rarer than gold, it's usually the more expensive of the two metals. It's even earned the name "rich man's gold."

But right now, in an exceedingly rare situation, the ratio is reversed, and gold is the more expensive metal.

As a result, Bill's projections show that the ratio will return to normal, and platinum prices will explode like fireworks, on the Fourth of July.

If you want to get in on this anomaly and grab your chance to make a mint in platinum in the next few months (and beyond), you need to act now.

And Bill's discovered a way for you to cash in ASAP.

You see, the last two times this gold anomaly hit, small platinum miners were the biggest winners. Taking a stake today in a little-known platinum mining stock Bill's just discovered could make you a millionaire before the ratio reverses itself… and a multimillionaire down the road.

The company plans to produce 91,500 ounces of platinum group metals the first year, ramping up to a full capacity of 250,000 ounces per year by year four – and continuing that production for the next 20 years.

Yet, despite its vast holdings, the company's market cap is shockingly low.

If the stock were valued at $20 billion, our calculated value of its resources and reserves, its stock price would be closer to $100 a share instead of the pennies it's trading for now.

Since we're talking about a tiny company, it's likely to experience some volatility.

But it's exactly these types of situations that can lead to the biggest, truly life-changing gains.

Investors positioned properly before the second mine goes "live" will likely see the biggest gains on their tiny share price.

And just like Halley's Comet, once this opportunity is gone, you're not likely to see it again for a long, long time.