The Ontario cannabis market will soar thanks to an expected 485% growth in medicinal marijuana. That means the medical marijuana sector in Ontario alone will be worth more than $2 billion after Canada legalizes marijuana, and U.S. investors can profit right alongside it…

All cannabis use will be legal in Canada on July 1, 2018. While medical marijuana has been legal in Canada since 2001, it will expand even more thanks to the full legalization effort. 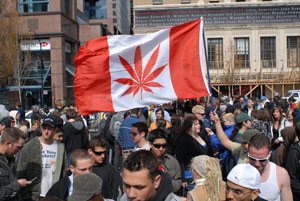 The medical marijuana market in Ontario is projected to climb from $379 million in 2018 to $2.22 billion by 2021, according to Brightfield Group projections.

That's a 485% increase in just three years, and the increased sales will send the prices of certain Canadian marijuana stock prices skyrocketing.

You see, the largest licensed marijuana producer in Canada in terms of patient enrollments is based in Ontario. With roughly 60,000 patients in June 2017, it's increasing its production facilities to be prepared for even more patients. Its subsidiary is currently increasing its greenhouse growing space by 700,000 square feet.

And before demand skyrockets, you could own a piece of this Ontario-based cannabis powerhouse, as well as the other top Canadian pot stocks we've found, right now.

The Easiest Way to Invest in the Ontario Cannabis Market

The first way is by purchasing stocks through a Canadian exchange.

But buying cannabis stocks on Canadian exchanges can be a complicated process for American investors. You need to find a broker that trades on the Toronto Stock Exchange (TSX), convert U.S. dollars into Canadian dollars, and keep track of all the different tax laws.

Instead of finding brokers that let you buy stocks on foreign exchanges and dealing with complicated tax laws, there's an easy way to invest in Canadian marijuana stocks.

The second way to buy Canadian marijuana stocks is through over-the-counter (OTC) markets. U.S. investors can buy Canadian pot stocks listed on OTC exchanges just like they would any other domestic stock.

And the good news is, many marijuana companies list their shares on OTC exchanges.

For U.S. marijuana companies, they have to list shares on OTC markets as opposed to the Nasdaq or New York Stock Exchange because they don't meet the minimum listing requirements. For example, a company must have a minimum aggregate cash flow of $27.5 million for the past three years to be listed on the Nasdaq.

Because legal marijuana is such a new industry, most companies can't meet the requirements to be listed on major exchanges. They turn to the OTC markets instead.

These companies want access to American capital, but dual listings in Canada and the United States are prohibitively expensive, especially for a new industry.

To list on a major exchange in the United States and Canada, they would have to pay fees for listing on both the TSX and a major U.S. exchange.

But thanks to OTC markets, you can own Canadian marijuana stocks before full legalization happens in July.

And we know the best to own to maximize your profits.

In an exclusive interview with Money Morning, pot stock expert Michael Robinson shares all the good news about Canada's legalization – including details on five tiny weed stocks that could potentially turn a small stake into $100,000…

How to Claim Your Profits in the $2.2 Billion Ontario Cannabis Market

My wife and I are ready to invest in the marijuana market.
Where do we go?

Michael Robinson – nova X reports, The Roadmap to Marijuana millions. Great start – additional research from there will really get you into it. He will get you started right.

We are a revolutionary Nano Particle encapsulated 30 nano meter particles of pure THC, THCA and THCV, without Psychoactive properties activated. The Patient, gets all the chemicals but they do not produce Psychoactive effects. Our Senior Market, does not want the "High" so our formulas, turn it off. Not to be told CBD will do, or CBD from IH, no, all of our medicine is made the same exact way our "Psychoactive Medicine is just we leave the THC, THCA and THCV, not activated. If the patient follows our instruction, they get all the nutrients and pain relief without "Activation" of the scheduled DEA THC activated. De activated Cannabis will not make you high but it will fight cancer.
We are licensed, small, in Tucson Arizona. Room for an Investor, ground flood.

Receive the cancer fighting ingredients and pain management without the psychoactive "kick"?!!! PERFECT. The CDC "policy" for opioid prescribing physicians now have their hands tied by the CDC "policy". Millions of patients are now undermanaged pain wise with many receiving NO pain management at all. We ARE patient abandoned but, dot/gov could care less. 66,000 people overdosed in 2017 up from 56,000 people in 2015. One full year after opioid medication sanctioning, reduction through federal law, not just a "policy", the overdose rate rose and the under managed patient abandoned pain management patient suffers worse. NEED cannabis without the psychoactive high. This…..would……be……fantastic!

I m ready to invest in a marijuana stock market and also some of my friends. How do we start. Is there someone we can call to guide use here to buy stocks? Thank you

I'm ready to invest into the penny stock marajuana. Need help with this process…who do I need to contact?

Who do I contact to invest in the pot stock