As the second-longest bull market on record continues, a market correction in 2018 is becoming a real possibility…

Market corrections are a normal part of the stock market's cycle of ups and downs. But unprepared investors could lose 10% of their portfolios or even more. 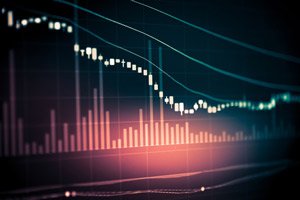 That's why we want our readers to be prepared no matter which direction the market is moving.

While the Dow has rocketed over 250% higher since March 2009, and nearly 20% higher this year alone, there are some market correction warning signs we're seeing.

And the next market correction shouldn't be that surprising. There have been four corrections of 10% or more since the bull market began in 2009.

2 Reasons We Could See a Stock Market Correction in 2018

The Dow rose above the 23,000 mark for the first time in October, which is excellent news for investors. However, there are two reasons that the soaring highs could come to an end.

The first is the tightening monetary policy by the U.S. Federal Reserve.

And it's kept rates at that historically low level. Until now.

The Fed has hiked interest rates four times since December 2015, and interest rates are now above 1% for the first time since 2008. With a third rate increase expected next month, and up to three more in 2018, interest rates will soon be above 2%.

Publicly traded companies took advantage of the cheap borrowing costs brought by low interest rates, and they used the money to repurchase shares of their own stock.

The trillions of dollars flowing into the stock market has helped boost share prices over the last eight years. And the low interest rate environment that made it possible is ending.

The second warning sign is that stocks are at historically high valuations.

While stocks have soared, they are trading at more expensive prices than their fundamentals show they should be.

Take a look at the Shiller P/E ratio, one of the top measurements of stock market valuations. Right now, that ratio sits at 31.42, which is 86.9% above its historical average.

Only twice has the Shiller P/E ratio risen higher than it is today: in 1929, before the stock market crash, and in 1999, ahead of the dot-com bubble popping.

Fortunately, we have two stocks you can buy that will protect your money, and even help you profit, during a market correction…

Protect Your Investments from a Market Correction with These 2 Stocks

The two stocks we're recommending have proven resilient during past downturns and even crashes. Both of these stocks brought positive returns during the tech crash in 2000, even as the broader markets fell more than 10%.

And while there's no guarantee these stocks will be immune from the next correction or pullback, they are some of the best companies in the most in-demand industries.

Money Morning Chief Investment Strategist Keith Fitz-Gerald thinks investors should hold on to stocks in the "Unstoppable Trends." The trick to making huge profits is to find "must-have" companies that fall into these six "Unstoppable Trends": medicine, technology, demographics, scarcity and allocation, energy, and war, terrorism and ugliness (also known as "defense"). The Unstoppable Trends are backed by trillions of dollars that Washington cannot derail, the Fed cannot meddle with, and Wall Street cannot hijack.

Raytheon is a leader in the defense industry, with billions in contracts with the U.S. government and other countries across the world. That means, if the market falls, Raytheon is going to continue to excel over the long term.

But RTN's real allure as an Unstoppable Trend pick is the fact that war is a reality of the world. For instance, as tensions rise abroad, the United States is more likely to need more weapons and equipment. When the United States launched a missile strike on a Syrian airbase on April 7, Raytheon's stock jumped more than 2%, since its missiles were used.

BDX is a healthcare company specializing in one-time use medical products utilized in hospitals and long-term care facilities. That means as populations age, more people will need this type of medical care, and BDX will be in even more demand. People will need healthcare whether the market falls or not.

But BDX is also an exceptionally well-managed company. It has a 10.54% profit margin and maintains a 1.58% dividend yield, even after a $12.2 billion takeover of CareFusion two years ago. That means the company's capital management is sustainable and will easily survive a market downturn. And that's good news for its shareholders during a stock market crash.

Keith Fitz-Gerald's Money Map Report subscribers who have followed along with his recommendations are now sitting on 17 triple-digit winners this year – including a 201.68% return and 132.35% gain that closed out in the same week.

IRS-Proof Your Life: The more you earn, the more the IRS takes. But these 100% legal tax exemptions could save you millions over the long term. Learn more…