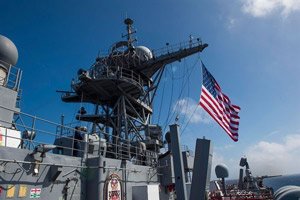 The COC has already been in limbo for roughly 15 years. In 2002, China and the members of the Association of Southeast Asian Nations (ASEAN) signed the nonbinding - and ineffectual - Declaration on the Conduct of Parties in the South China Sea.

The declaration was designed to preserve the strength and independence of the smaller nations in Southeast Asia, but thanks to a total lack of enforcement, China has essentially been doing what it pleases and claiming the whole region for itself.

But now, China and the members of ASEAN are meeting to hammer out a more concrete code.

And thanks to China's inordinate power in the region, any consensus reached in the dispute will signal China's unequivocal victory in the South China Sea conflict, once and for all.

And that could be today.

China has historically disavowed all binding legal propositions, doing what it wants instead of what the international community decrees.

So why did China suddenly change its mind?

The framework on which today's talks are based is weak - which is precisely what China needs to clutch total economic control over the region.

While the framework was not made public, Reuters did share a leaked, two-page blueprint that consisted of a "broad" outline that left "[a] wide scope for disagreement," the outlet reported on Aug. 6.

"It urges a commitment to the 'purposes and principles' of the United Nations Convention on the Law of the Sea (UNCLOS) but does not specify adherence to it," Reuters reported.

This "urging" without consequences is exactly the kind of feeble agreement under which China has done what it pleases in the South China Sea for the past several decades. And China plans to keep it that way, as evidenced by what was cut from the framework for today's talk.

Reuters also shared a separate ASEAN document, dated May 2017, which showed that Vietnam had originally urged for stronger, more specific language in the framework and had wanted mention of a dispute resolution mechanism and respecting "sovereignty, sovereign rights, and jurisdiction."

But those May stipulations never resurfaced in Aug. 6's agreed-upon framework.

It's easy to extrapolate why: China would never concede to sovereignty claims by ASEAN members that would specifically allow fishing and the extraction of natural resources to be made within. That would translate to Beijing willingly and knowingly giving up billions of dollars' worth of resources to other countries.

But the vaguely worded framework, finalized on Aug. 6, from which the Red Dragon and ASEAN nations will work today?

It gives China, in particular, a lot of wiggle room to make adjustments as it sees fit.

And this is why we'd better hope that today's talks don't result in a consensus.

Editor's Note: Don't miss a single update on the South China Sea as Beijing steps up its aggressive campaign to oust the United States from the disputed waters. Get real-time alerts sent to your inbox, completely free, here.

Because a consensus would make China $3 trillion richer.

As a vital artery of trade for many of the world's largest economies, the South China Sea sees some $3.37 trillion worth of goods passing through its waters annually, with $1.2 trillion of that total accounting for trade with the United States.

Should China agree to a COC today - one that's based on such a vague framework - you can be sure that the agreement will benefit China.

If China successfully negotiates a binding arrangement in its favor today, the United States would feel the following consequences... immediately: